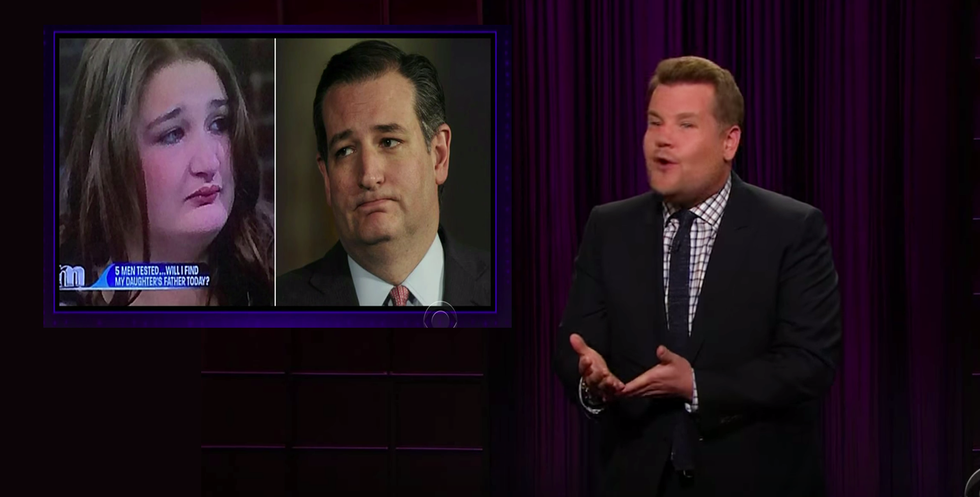 Republican presidential candidate Ted Cruz has been working the sympathy vote pretty hard with his fundraising emails. In a recent one, Cruz talked about all of the terrible things he's had to endure during his campaign for president. They include having to spend time away with his family, not getting enough sleep, personal attacks and more.

Elizabeth Warren joined the rest of the country in rolling her eyes. Taking to Twitter the Massachusetts senator tweeted:

Know who gets no personal time? People who work 2 min wage jobs to support their families. @TedCruz opposes giving them a raise.
— Elizabeth Warren (@Elizabeth Warren) 1461100876.0

Hey @TedCruz: Maybe you should spend less time complaining about your "significant sacrifices" - & more time doing something about theirs.
— Elizabeth Warren (@Elizabeth Warren) 1461101044.0

"We get it," Corden said. "Ted Cruz running for president isn't just hard for Ted Cruz, it's hard for all of us." But in case you can't tell, Corden wants you to know that Warren's "Boo hoo" was sarcastic.

"But, maybe she's being too hard on him. Ted Cruz just misses time with his family and his daughters and that's understandable," Corden said trying to give the Texas senator the benefit of the doubt. "And I'm sure his daughters feel the same way." Corden then rolled a clip of Cruz trying to kiss his daughter for the camera, she recoiled like he had leprosy. "He just can't catch a break lately. Like if you think his daughter was rude to him, check out this video at a Republican's donors gala where I think it's safe to say he didn't capture the room."

The footage is humiliating. Cruz was speaking and no one was paying the slightest bit of attention. They were milling about and eating their food, chatting with other attendees. "I mean, that was definitely the worst TED Talk ever," Corden concluded. "I mean, if you watch that video, Ted Cruz has all the presence of a substitute teacher on the last day of school."

Apparently, the lack of interest had more to do with people being served their desserts during his speech. "So, now it's a fact. Cruz would lose the presidential race if he was running against tiramisu."

But that's not even the best part. The best comes from this week when a woman who appeared on the Maury Povich Show Monday to try to determine the father of her child. Now, how is this related to Ted Cruz, you might ask. "Let's take a look at the girl," Corden encouraged.

"You can imagine Cruz's campaign manager going, 'Well, the good news, Ted, is you've gone viral,'" Corden joked. "But she appeared on Maury and she looks like Ted Cruz, and I've got to say it's rough appearing on Maury is only the second most embarrassing thing to happen to you that day."

Corden thinks it's really only a matter of time before someone says to Ted Cruz: "Well, Ted, we've got the results and you are NOT the President of the United States."