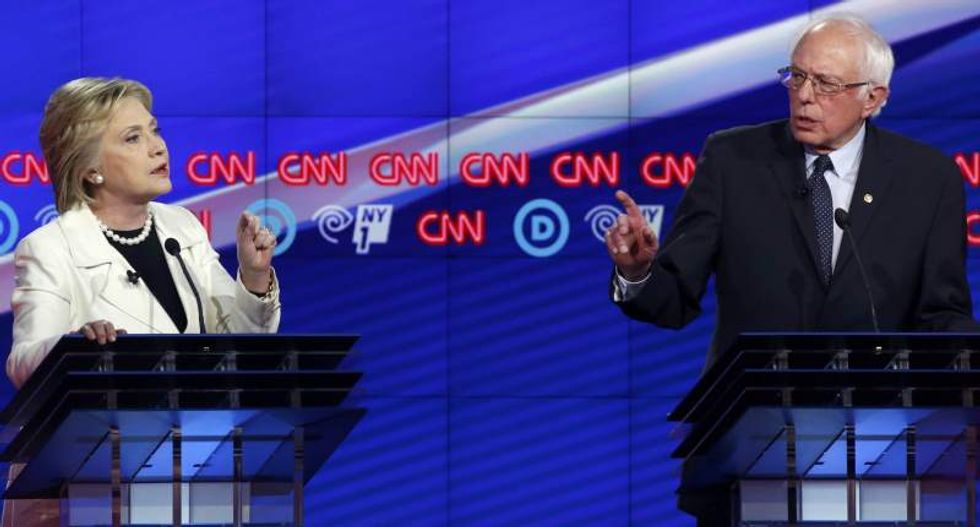 Democratic presidential candidates Hillary Clinton (L) and Senator Bernie Sanders speak at the same time during a Democratic debate hosted by CNN and New York One at the Brooklyn Navy Yard in New York on April 14, 2016. (Reuters/Lucas Jackson)

Democratic front-runner Hillary Clinton and rival Bernie Sanders battled fiercely on Thursday over Wall Street, guns and the minimum wage and questioned each other's judgment in a contentious and at times high-volume U.S. presidential debate.

Five days before New Yorkers vote in a crucial nominating contest, Clinton and Sanders showed the pressure of their marathon race with a series of feisty exchanges that featured them shouting at each other in unison.

"If you’re both screaming at each other, the viewers won’t be able to hear either of you," moderator Wolf Blitzer warned at one point.

Thirty minutes into the debate, Clinton had been mentioned 35,000 times on Twitter and Sanders 30,000 times. The firm said 56.2 pct of Clinton tweets were positive while a little more than half of Sanders' tweets reflected negative sentiment.

Sanders, who had questioned the former secretary of state's qualifications to be president, conceded she was qualified but said she had shown poor judgment by taking money from Wall Street for speeches she gave, by voting as a U.S. senator to back the 2003 Iraq invasion and by supporting free trade deals.

"Does Secretary Clinton have the intelligence, the experience to be president? Of course she does but I do question her judgment," Sanders said at the debate in the New York borough of Brooklyn.

Clinton, 68, responded the charges were also an attack on President Barack Obama, who as a candidate raised money on Wall Street and had Super PACS, outside funding groups that can raise unlimited sums of money.

Clinton called it a "phony attack that is designed to raise questions when there is no evidence or support to undergird the insinuations that he is putting forward in these attacks."

Clinton said Sanders had begun to show his lack of depth on policy issues. She cited an interview with the New York Daily News editorial board where she said he was unable to clearly explain how he would achieve his oft-stated goal of breaking up the big banks.

"You need to have the judgment on Day One to be both president and commander-in-chief," Clinton said.

Pressed on what Clinton had done to show she was influenced by the money she had raised on Wall Street or her speaking fees, Sanders said she was too busy giving speeches to Goldman Sachs to break up the big banks.

"He cannot come up with any example because there is no example," Clinton replied. "I stood up to the behavior of the banks when I was a senator."

Clinton, who has repeatedly attacked Sanders for his vote in Congress for a bill that protected gun manufacturers from being sued over the criminal use of their products, confronted the U.S. senator from Vermont when he laughed as she discussed her accusations.

"It's not a laughing matter," she said.

When asked about a Connecticut judge's decision to side with victims of the Sandy Hook shooting spree against gun manufacturers, Sanders said he did not owe the families of the victims an apology for his stance.

During the debate Clinton, who had supported raising the minimum wage to $12, said she would sign a bill raising it nationally to $15. Sanders, who has not released his full tax returns yet, said he would release his full 2014 returns on Friday.

The debate follows a contentious period in a Democratic campaign that has been relatively mild compared to the Republican Party brawl. Earlier on Thursday, Sanders denounced as "inappropriate and insensitive" a warm-up speaker's call at a Manhattan rally for Sanders on Wednesday to stop electing "corporate Democratic whores," a remark seemingly aimed at Clinton.

The last nine opinion polls taken in New York, a state Clinton once represented in the U.S. Senate, have shown her with a double-digit advantage over Sanders.

Brooklyn-born Sanders, 74, has won seven of the last eight state Democratic nominating contests, but most of those were small states that did not help him cut Clinton's commanding lead in the race for the 2,383 delegates needed to win the nomination to represent the party in the Nov. 8 presidential election.

Clinton leads Sanders by 251 bound delegates to the July nominating convention. Her lead balloons to almost 700 when the support of superdelegates - party leaders who are free to back any candidate - are added.

Sanders faces a tough task cutting Clinton's lead since Democrats award delegates in each state proportionally to the candidate's level of support, allowing her to pile up delegates and draw nearer to the nomination even if she loses a state.

Sanders has pledged to battle all the way to the party’s July convention in Philadelphia, arguing superdelegates will switch to him once they realize the extent of his popular support. Clinton so far has 2.4 million votes more than Sanders in the state-by-state nominating race.

Watch the debate in its entirety below.