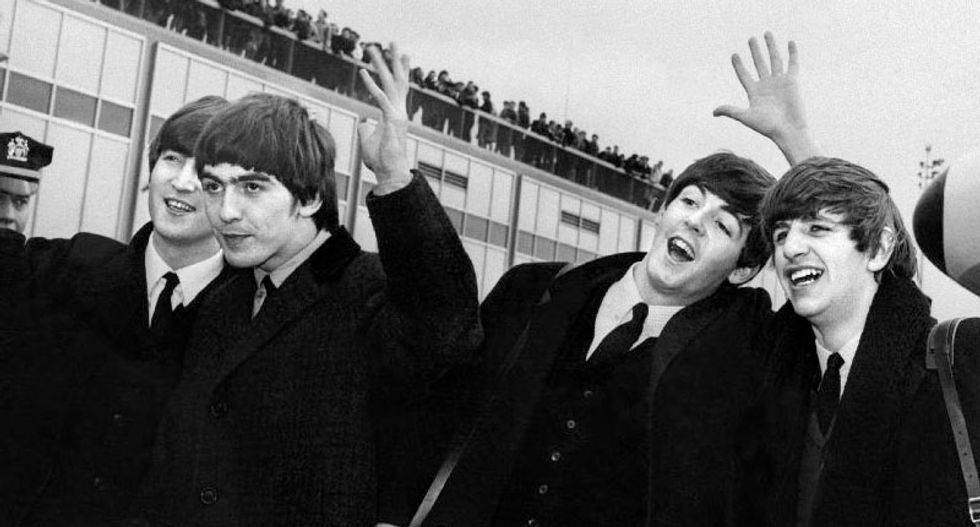 The Beatles have sold over 1.6 billion records (AFP Photo/)

Never-before-seen footage of The Beatles "mucking around" in a make-up studio ahead of a television performance, shot more than half a century ago, was released by Australia's national film and sound archive Tuesday.

The 49-second black-and-white silent film clip -- which the national archive described as "really rare" -- was shot with an 8mm camera belonging to Australian dancer and make-up artist Dawn Swane, who was working at Granada TV in Manchester, Britain, at that time.

The previously unreleased footage, from November 1, 1965, shows the four members of the legendary band having fun in front of the camera as their make-up is applied.

"I was in the make-up room. And so we were having some champagne," Swane, now 83, said in a statement released by the National Film and Sound Archive of Australia (NFSA).

"And anyway, I don't know if it was John (Lennon) or if it was Ringo (Starr) but they took the camera off me and said, 'This is no way to use a camera', and they sort of jiggled it upside down and inside out a bit, and everybody was just mucking around.

"But that was great. I mean they were a nice group of people. They really were."

The clip, along with other home movies, including British actor Michael Caine in the make-up chair, was donated by Swane's daughter Melinda Doring to the national archive.

"We don't have anything as significantly rare in the collection in terms of a home movie," NFSA assistant film curator Tara Marynowsky told AFP.

"(To have) something so high-profile is just quite incredible to have, especially when our client Dawn Swane held on to it for quite some time. Years and years later, we get to uncover this and make that available to audiences... it's really, really rare actually."

Doring said she first saw the footage as a teenager, but came across it again four years ago and realised it was starting to have "vinegar syndrome", a chemical process which causes film to deteriorate.

"I knew there was stuff there that needed to be preserved, so I knew it was the right time to ring up the archive and get it stabilised and preserved before it would have been lost forever," Doring told AFP.

Swane has also kept the original call sheet for the television programme the performers were preparing for, "The Music of Lennon & McCartney", which has on it autographs from all four Beatles as well as legendary American composer Henry Mancini.