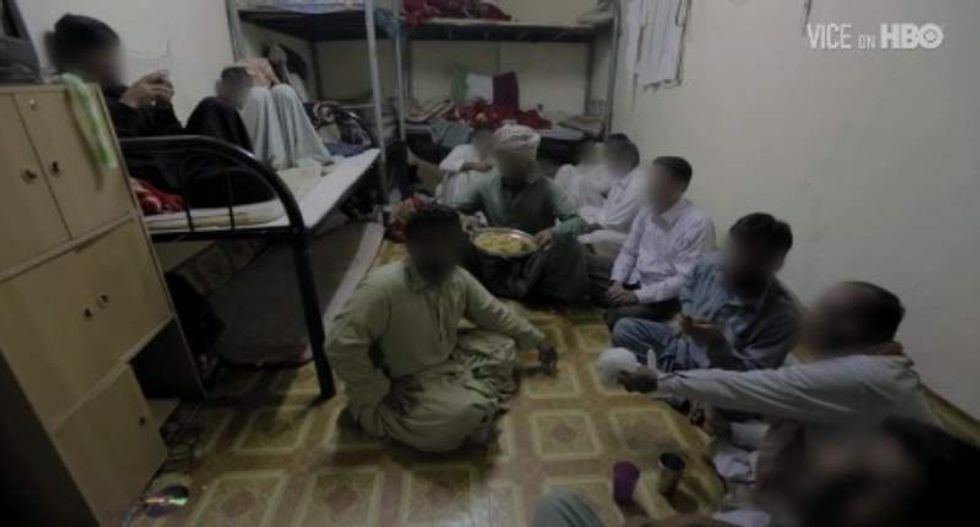 Immigrant workers in Dubai building a golf course bearing Donald Trump's name are packed in labor camps that are low even by the city's "unbelievably low standards," according to a report aired by Vice on Friday.

"The conditions of the guys building the Trump International Golf Course were the worst I've ever seen," said correspondent Ben Anderson. "Having guys live 21 to a room with rats running around above them; having to work extremely hard in extreme heat for two years just to break even, just to pay off the debts they accrued getting there."

During his report, Anderson tailed a group of buses taking workers back to their camp after working on the course. The camp, he learned, was two hours outside of Dubai in an area that lacked even an access road. One worker said he earned $231 a month, but could not leave because the company that contracted him took his passport.

Besides being stuffed into dormitories, he said, workers had to make do with restrooms that "didn't look fit for human beings."

Their working situation, Anderson explained, was described by Human Rights Watch officials as looking "like a trafficking network."

According to the Daily Beast, the golf course is not being built directly by a company belonging to the Republican presidential candidate, which released a statement saying it has "a zero tolerance policy for unlawful labor practices at any project bearing the 'Trump' name."

Anderson said the horrific conditions workers endure in Dubai are endemic to the United Arab Emirates, where service workers are particularly in danger of mistreatment.

"Trump is just the latest in a long line of Westerners who have gone there, taken -- I assume -- large amounts of money and turned a blind eye to something which is very obvious and very well-documented," he said.

The episode is available for free cable viewing for non-subscribers as part of a promotional effort by HBO this weekend.

Footage of Anderson visiting the workers' camp, as posted online, can be seen here.

Anderson's observations following his reporting can be seen below.

.@benjohnanderson met migrant workers building some of Dubai's biggest developments. This is his debrief #VICEonHBOhttps://t.co/tMGkrxqQw2