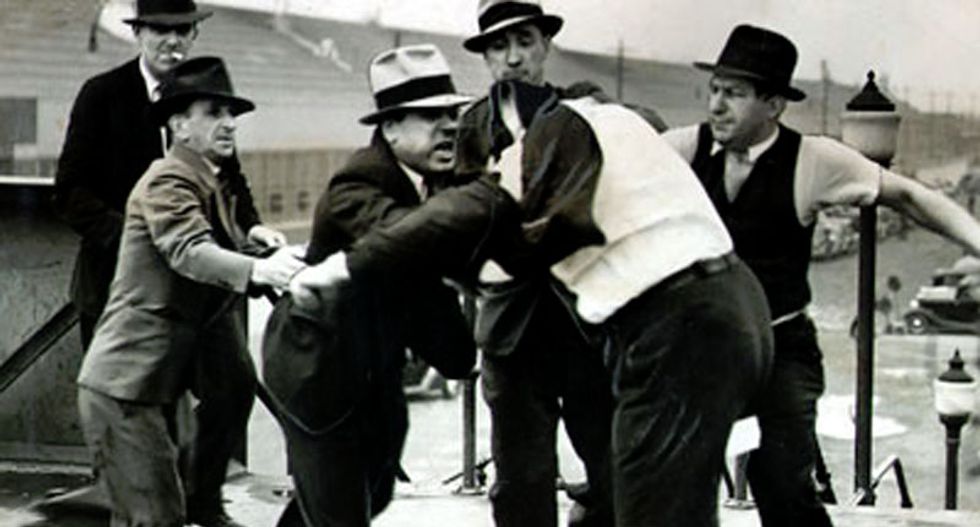 Seventy-five years ago today, in 1941, workers at the Ford Motor Company's River Rouge complex in Dearborn, Michigan, launched a successful strike for union recognition. The Rouge was the largest industrial complex in the world, created as an impregnable anti-union fortress. The company's Service Department spied on and committed violent acts against workers and trade union advocates who approached the factory gates.

The Rouge gates were the site of two of the most notorious anti-union episodes in U.S. labor history. In the 1932 Ford Hunger March, Ford service members and Dearborn police opened fire on unemployed demonstrators, killing four immediately. In the 1937 Battle of the Overpass, Ford service members beat UAW officials Walter Reuther and Richard Frankensteen and a dozen union supporters, mostly women, seeking to pass out flyers.

The company's violent proclivities were made especially dangerous by the media-savvy popularity of the company's founder and principal owner, Henry Ford.  The iconic billionaire was the recipient of millions of dollars of free publicity for his advocacy of a high-wage, high-productivity, high-consumption society. His philosophy also included opposition to unions, to the New Deal, and to women working outside the home. Most disturbing was his publication and distribution of the anti-Semitic forgery, The International Jew, and his acceptance of a medal in 1938 from the Nazi regime of Adolph Hitler.

Ford was one of the most well-known individuals in the world in 1941. Opposed by unionists, liberals, and leftists, he nevertheless was viewed by many as a "friend of labor." The majority of Ford workers at the Rouge complex thought otherwise. They overcame not only violence and the Ford media halo but also the company's attempt to break their strike by dividing them along racial lines and charging their strike was a Communist plot.

Today the public hears daily about another iconic media-savvy violence-advocating billionaire, Donald Trump. Just as Ford was defeated by a mass mobilization of a racially integrated and well-organized movement of workers, Trump can be defeated by a democratic, integrated mass movement of anti-fascists. Grass roots activism against fascists and proto-fascists was an important feature of the progressive movements of the New Deal and World War II eras. Civil rights, feminist, and peace activists, trade unionists, Sanders and Clinton supporters should en masse join the pioneering protesters at Trump rallies to say as the anti-fascists of the 1930s declared: "They shall not pass!"

The mass action of Ford workers begun on April 1, 1941 led to the establishment of a strong union throughout the Ford plants in the United States and ended Ford's role as the leading anti-unionist and sympathizer with fascism in the country. Massing at Trump rallies everywhere can defeat his fascist demagoguery and launch a united movement of U.S. working people, female and male, immigrant and native-born of all colors. Jobs, health care, equality for all, peace, and a sustainable relationship with nature: that is the world we can win.

Martin Halpern is the author of "UAW Politics in the Cold War Era" and "Unions, Radicals, and Democratic Presidents: Seeking Social Change in the Twentieth Century." He is completing a book on the unionization of the Ford Motor Company.