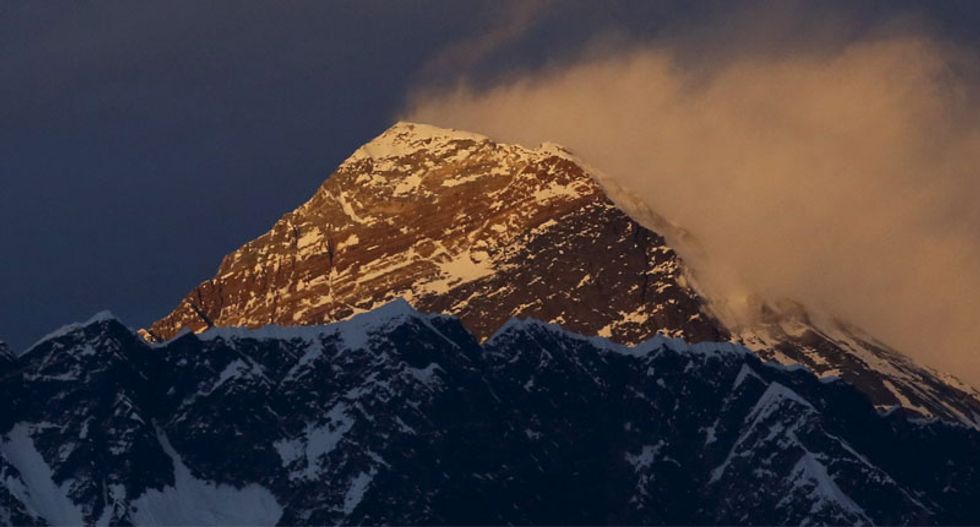 Light illuminates Mount Everest, during the in Solukhumbu District also known as the Everest region, in this picture taken November 30, 2015. REUTERS/Navesh Chitrakar

A 42-year-old woman born in Nepal climbed Mount Everest for the seventh time on Friday, breaking her own record for the most summits of the world's highest mountain by any woman, a hiking official said.

Lhakpa Sherpa, who works in a 7-Eleven store in Connecticut, reached the 8,850-meter (29,035-foot) peak from the Tibetan side, said Rajiv Shrestha of the 7 Summits Adventure company that organized her expedition.

"She has broken her own record," Shrestha told Reuters. She was accompanied to the top by a Nepali guide.

Three hours later, eight members of a Russian team and eight of guides also climbed from the same northern route, he said.

Lhakpa Sherpa, one of the 11 children of a Nepali family, was born in eastern Sankhuwasabha district where the world's fifth highest mountain, Makalu, is located.

Two other Sherpa climbers share between them a record for 21 ascents of Everest, the maximum climbs by men.

More than 330 climbers have climbed Everest from the Nepali side this month after expeditions were forced off the world's tallest peak by last year's devastating earthquake that killed at least 18 people at Base Camp.

In total, 9,000 people were killed across Nepal in the 7.8 magnitude quake, the worst disaster in the country's recorded history.