Adorable lesbian gorillas prove that homosexuality is not unnatural 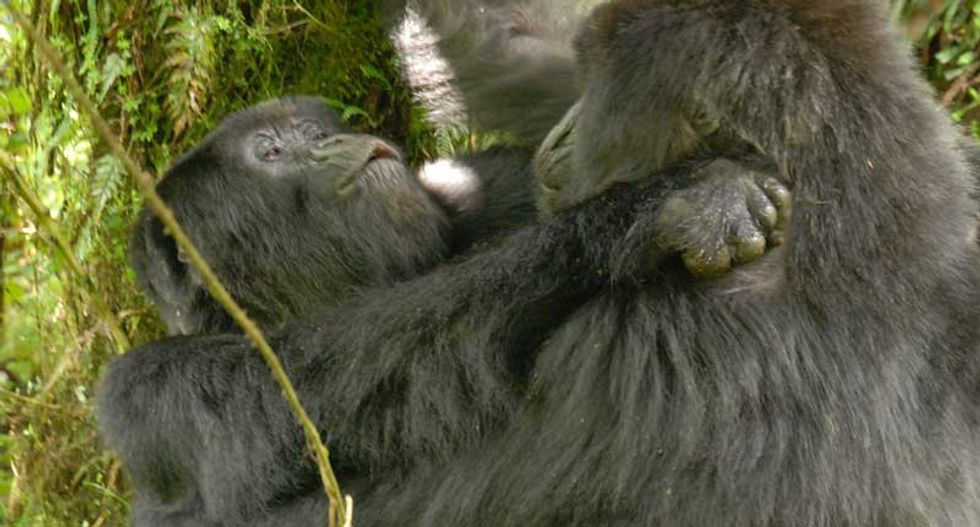 Anti-LGBT groups and Bible-thumping conservatives often claim that homosexuality is wrong because it is ‘unnatural’. But new scientific evidence further suggests that homosexual activity is widespread across the animal kingdom. In fact, a recent field study published in the online journal PLOS ONE has found that most female gorillas—some of our closest relatives genetically—engage in lesbian behavior in the wild.

A group of researchers from the University of Western Australia led by Dr. Cyril Grueter, an associate professor and longtime primate expert, observed a group of wild gorillas in Rwanda over an 18-month period.

The researchers were working with the Dian Fossey Gorilla Fund studying feeding ecology of mountain gorillas when Dr. Grueter spotted a group of females trying to court the dominant male gorilla. When the male chose his mate and rejected the other females, those ladies decided that they didn’t need him at all.

This was the first time that gorilla lesbian behavior had ever been officially documented in the wild, although that does not mean that it is at all rare. Some may contend that what the researchers perceived as same-sex activity might have actually just been monkeying around. But the lead investigator says there was no mistaking what was going on. In an interview with Daily Mail Australia, Dr. Grueter said, “They were obviously deriving sexual pleasure from each other.” He then went on to explain the interactions in high school gym locker room detail: “It usually happens that two females get on top of each other, rubbing their bellies and genitals together.”

Although the behavior was relatively frequent, it wasn’t entirely habitual either, leading the researchers to conclude that it was due to sexual arousal and not indicative of a lasting intimate relationship. Perhaps after being rejected by male apes, the ladies—afraid to get their hearts broken again—simply preferred to have friends with benefits.

But that’s not the whole story. There were a few curious observations worth mentioning. Occasionally, a male would aggressively interrupt the copulating female pair, proving that jealousy and macho behavior isn’t restricted to humans. As a result, the females would often seek out areas of dense vegetation where they could fool around in peace and free from judgment.

Another interesting observation was that there was no lesbian sex between closely related gorillas. Apparently these primates have stricter moral guidelines than certain members of royal families in "Game of Thrones."

It is important to note that none of the female gorillas being studied were exclusively homosexual. The authors of the study refer to their sexuality as “flexible”, and interestingly, a 2015 study at Notre Dame found human women to be similarly open-minded, as they were three times more likely than males to sexually experiment with the same gender. More data is needed to answer the question of why this is the case with certainty, but the researchers put forth one interesting theory, known as the “female competition hypothesis”.

According to this idea, a female gorilla uses homosexuality as a strategy to diminish the sex drive of any competing females, thereby increasing their chances of copulation with the desirable male. It’s essentially the clever female analog of a cock block—a gorilla clam jam, if you will.

Regardless of the motivation behind the lesbian activity, there is no doubt that the behavior is far from unnatural, since it didn’t occur as a result of being in captivity. And this certainly isn’t the first instance of gay behavior in nature. Male bonobos, another type of primate, are also known to partake in gay interaction. Additionally, workers at a zoo in Canada had to separate a gay penguin pair so that they would be forced to breed. So the next time that you hear a religious nutjob claiming that homosexuality is not right because it is not natural, politely tell them that in the animal kingdom it is actually about as natural, and almost as common, as human ignorance.