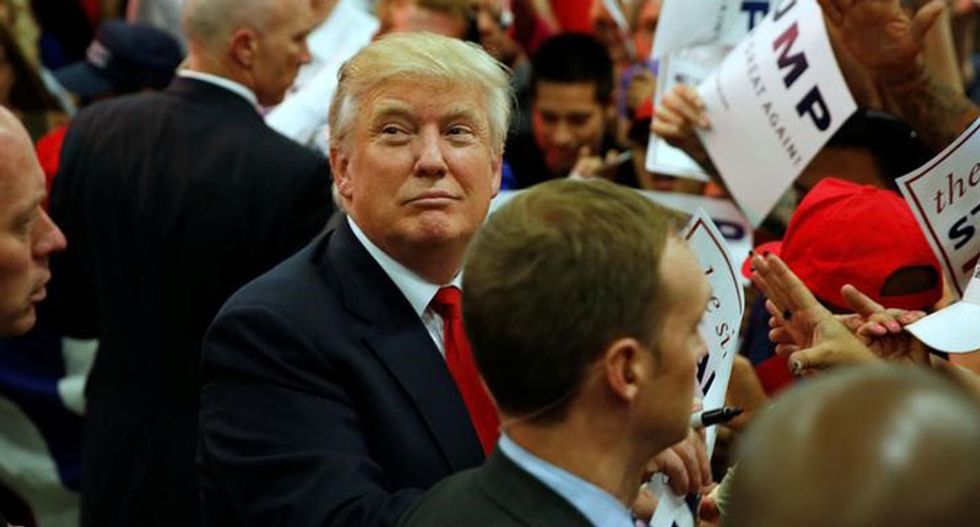 Police in Anaheim, California, warned they would take "swift and decisive enforcement action" if protesters get out of hand at a Donald Trump rally on Wednesday, a day after a violence broke out at the Republican presidential candidate's campaign event in New Mexico.

Trump's appearances in the U.S. West in areas with significant Hispanic populations have drawn large protests - such as Tuesday's violence in Albuquerque, where rock-throwing demonstrators were arrested - because of his remarks that Mexico is sending criminals and rapists to the United States.

Trump's problems with Latino communities could dampen his Nov. 8 election hopes. A poll by the political research group Latino Decisions found 87 percent of registered Hispanic voters view Trump unfavorably and states like Nevada and New Mexico have growing Hispanic populations that could tip the election.

Supporters of the presumptive Republican nominee have been hopeful that his likely opponent, Democrat Hillary Clinton, will be dogged by her own problems to offset his difficulty with some populations. On Wednesday, Clinton faced renewed criticism about her use of a private email server after an inspector general report cited her for violating agency policies.

California and New Mexico both hold primary elections on June 7 and on Tuesday night, hundreds of protesters tried to swarm the convention center in Albuquerque, New Mexico, where Trump spoke, knocking down barricades, waving Mexican flags and hurling rocks and bottles at police officers in riot gear. Police responded with smoke bombs and pepper spray.

Police said they made arrests both outside and inside the rally, where protesters continually interrupted the billionaire New York developer's speech. The police department's Twitter feed said officers were treated for injuries caused by thrown rocks.

In a Twitter post on Wednesday, Trump called the protesters "thugs who were flying the Mexican flag."

"The rally inside was big and beautiful, but outside, criminals!" he said.

Trump is scheduled to speak at 3 p.m. EDT (1900 GMT) in Anaheim, a city about 25 miles (40 km) from Los Angeles. At the city's 7,500-seat convention center, authorities boosted staffing levels, deployed officers on motorcycles to control traffic and urged attendees to be on their best behavior, Anaheim Police Sergeant Daron Wyatt said.

"We respect the rights of everyone to protest and get their word out," Wyatt said, adding they must do so "peacefully and within the confines of the law."

Anaheim Police Chief Raul Quezada said, "Everyone has the right to participate without fear of violence or disorder and we are prepared to take swift and decisive enforcement action should it become necessary."

Previous appearances in the area by Trump have been marked by disruptions. Seventeen people were arrested last month at a Trump rally in Costa Mesa, about 20 miles (32 km) south of Anaheim, media reports said, after protesters blocked traffic and threw rocks and debris at motorists and police officers.

Despite Trump securing the Republican nomination and beginning to build a consensus within his party, his trip west also has revealed the continued divisions within his own party.

While speaking in New Mexico, he criticized the state's Republican governor, Susana Martinez, by saying, "She’s not doing her job."

Martinez has not endorsed Trump and has said she will continue to press him on how he will help her state.

"The potshots weren’t about policy, they were about politics," Martinez's office said in a statement in response to Trump. "... Governor Martinez doesn’t care about what Donald Trump says about her – she cares about what he says he will do to help New Mexicans. She’s disappointed that she didn’t hear anything about that last night."