Angela Rye fires back at Trump backer: If Hillary is an 'enabler' what does he call his three wives? 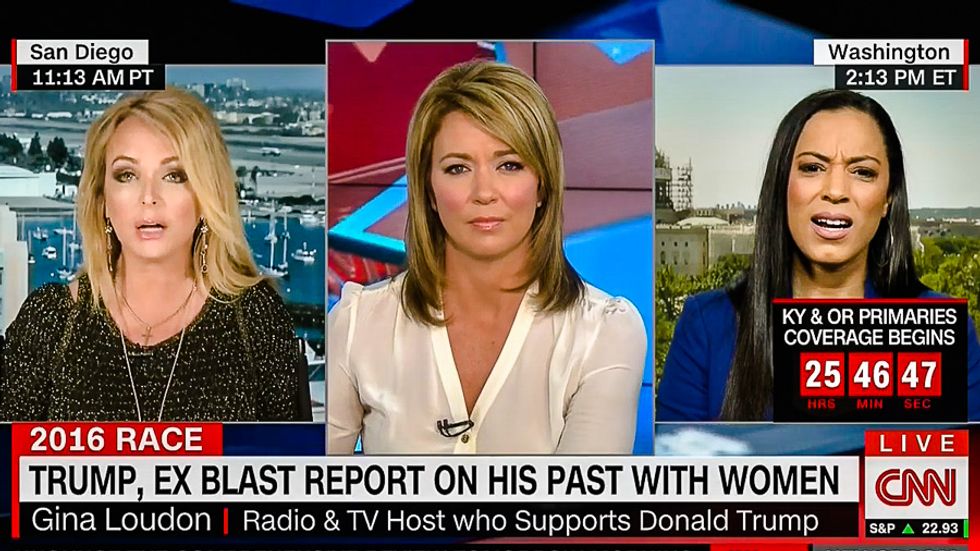 CNN contributor Angela Rye pointed out to Trump supporter Dr. Gina Loudon on Monday that by accusing Hillary Clinton of "enabling" her husband's affairs, Trump was also implicating his multiple wives in his affairs.

Rye pointed out during an interview on CNN that a disagreement between Trump's former girlfriend, Rowanne Brewer Lane, and New York Times about her experience with the candidate did not refute the fact that "women are just objects to him."

"They are simply items that he collects," she explained. "And it's clear -- even if Rowanne does not know -- she was a part of that collection. The fact that he had a drawer full of bathing suits is crazy, it's ridiculous."

"I'm never going to talk about Donald Trump's daughter, but I think it's disgusting that he calls [Ivanka] a 10 or 'Isn't my daughter hot?'" Rye continued. "I feel that my dad should continue to uplift me and not ask anyone to rate me."

London, however, said that she "couldn't care less" about Trump's alleged treatment of women.

"And the bottom line is his opponent is Hillary Clinton," Loudon insisted. "And whether we as women like it or not, she has hired less women and she does pay them less than Trump pays them."

Rye interrupted, demanding proof: "What you all do is point to anecdotal [evidence] with no facts. And I'm just not going to let you do that today."

But according to Loudon, Trump "didn't have a reason to be such a gentleman" because he was a businessman instead of a politician.

"I think what it reprehensible is you take someone like Hillary Clinton, who has basically danced on the assault of the women -- dozens of women, by the way -- that her husband has maligned and assaulted," Loudon continued. "I wish Hillary would come to the defense of these women."

At that point, Rye's facial expressions could not contain her outrage at Loudon's remarks.

"We know that Donald Trump will continue to call her an 'enabler' and I am just dying to know what he would call his three wives based on his behavior?" Rye wondered.