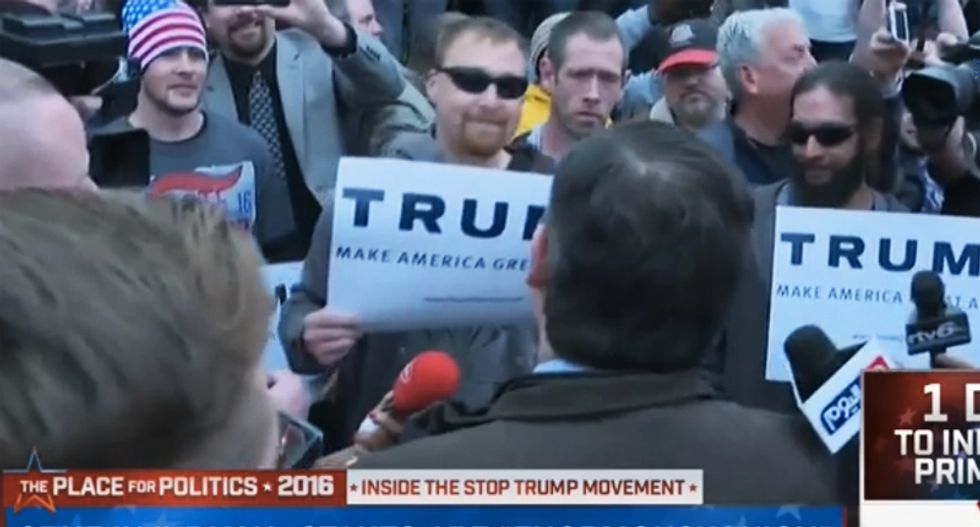 Texas Senator Ted Cruz is having a rough go of it in Indiana where he trails GOP front runner Donald Trump in tomorrow's primary.

Today didn't get any easier when he was confronted by Trump supporters who treated him like -- well, like the abusive Donald Trump would.

At a rally in Marion, Cruz was called "Lyin' Ted" -- a favorite of the billionaire businessman -- by a Trump fan and Cruz attempted to engage the man in a conversation that went nowhere fast.

After being called “Lyin’ Ted,” and told he was the  “problem,” Cruz tried to list off a litany of damaging issues about Trump to the man who smirked and kept interrupting Cruz, peppering him with questions.

“Where’s your Goldman Sachs jacket? We know your wife works there,” Cruz was asked.

“Sir, with all respect, Donald Trump is deceiving you. He is playing you for a chump,” Cruz said.

“The thing is that I don’t agree with everybody but I believe in Trump," the man replied." He’s the only one that’s going to put us where we need to be."

Another man jumped in to add: “You’ll find out tomorrow, Indiana don’t want you.”

Cruz replied, “Well, sir, you are entitled to have your–” only to be called “Lyin’ Ted” again.

Trying once more, Cruz said, “America is a better country–” with a Trump supporter finishing his sentence adding, "Without you."

“Thank you for those kind sentiments. Let me point out, I have treated you respectfully the entire time," Cruz continued."And a question that everyone here should ask–”

Cruz was interrupted again: “Are you Canadian?”