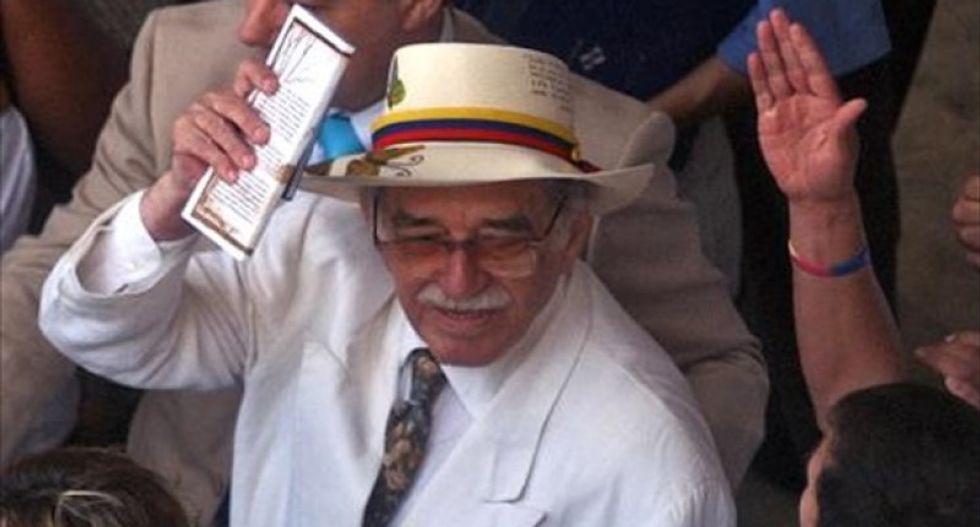 The ashes of the late Nobel Prize-winning novelist Gabriel Garcia Marquez will be laid to rest near his seaside home in Colombia on Sunday.

The bestselling author of the modern classic "One Hundred Years of Solitude" died in April 2014 in his adopted home of Mexico at the age of 87.

Now his ashes have been brought to his native Colombia to rest in the colonial city of Cartagena de Indias, where well-wishers will pay homage to him on Sunday.

President Juan Manuel Santos will be among 400 guests and relatives of the writer at the ceremony in the cloisters of Cartagena University, where he will be laid to rest, the institution's press service told AFP.

"It is a great honor. I am very moved," said Gonzalo Garcia Barcha, one of the author's two sons.

Garcia Marquez was born in Aracataca near Colombia's northern Caribbean coast and started out as a journalist in Cartagena.

"Cartagena is the city where the Garcia Marquez family is based. It is where my grandparents are buried," Garcia Barcha told AFP by telephone from France, where he now lives.

"It seemed natural to us that his ashes should be there too."

Garcia Marquez described journalism as "the best job in the world." But it was through his novels and short stories that he made his mark on the world.

He was hailed as the father of "magical realism" for fantastical and romantic stories such as "One Hundred Years of Solitude" and "Love in the Time of Cholera."

Hailed for helping put Latin America on the literary map, he won the Nobel Prize for Literature in 1982.

A box containing the ashes will be laid in the university's old patio inside a column holding a bronze bust of the writer, sculpted by the British artist Katie Murray.

"At the family's request it will be a simple ceremony with guests, lovers of culture, renowned writers... and journalists," the university said.

Garcia Marquez was a vocal advocate of human rights during the numerous dictatorships that reigned in Latin America for decades in the 20th century.

He drew criticism from some for supporting the communist revolution in Cuba, as well as for leaving to live outside his home country, stricken by civil conflict for the past half-century.

Santos described the writer after his death as "the greatest Colombian of all time."

Another major figure of Latin American letters, the Chilean poet Pablo Neruda, was laid to rest last month at his home beside the Pacific Ocean in his native country.

Years after his death in 1973, Neruda's remains had been disinterred and examined by forensic scientists investigating whether he had been poisoned by the late dictator Augusto Pinochet's regime.