Bernie Sanders rips Trump amid West Virginia primary win: 'It is not enough' to just reject him 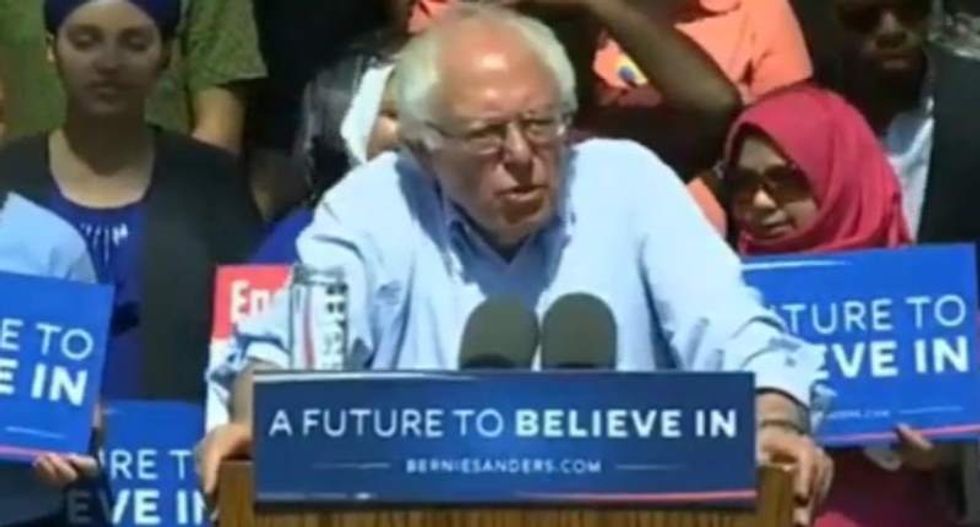 Sen. Bernie Sanders (I-VT) addresses the crowd at a rally in Stockton, California on May 10, 2016. (YouTube)

By Dan Roberts and Ben Jacobs, The Guardian

A defiant Bernie Sanders refused to go gently into the night on Tuesday with another last-minute primary win over Hillary Clinton that comes despite her commanding lead in the national race for delegates.

In a fundraising email sent out soon after polls closed, the leftwing senator hailed his victory in West Virginia and said: “Every vote we earn and every delegate we secure sends an unmistakable message about the values we share, the country’s support for the ideas of our campaign, and a rejection of Donald Trump and his values.”

He added: “There is nothing I would like more than to take on and defeat Donald Trump, someone who must never become president of this country. But I believe that it is not enough to just reject Trump – this is an opportunity to define a progressive vision for America.

In the Republican race, Trump beat former rivals Ted Cruz and John Kasich in Nebraska and West Virginia. The two remained on the ballot despite having droped out.

But with West Virginia’s 29 delegates awarded on a proportionate basis, the small net gain for Sanders is unlikely to make much of a dent in the lead of 290 pledged delegates that Clinton had going into the contest. She is much further ahead when superdelegates – party elites not bound by primary results – are factored in to the equation.

The West Virginia result – called by the Associated Press two and a half hours after polls closed – is likely to raise awkward questions for both candidates about the extent to which they can reunite the party once the Democratic primary contest comes to an end.

Exit polls conducted by television networks suggested that a third of Democrats in West Virginia would vote for Donald Trump in a general election, implying that many Sanders supporters are unwilling to reconcile themselves to Clinton’s nomination while her supporters in this conservative-leaning state are equally put off by his very liberal platform.

The demographics of the West Virginia primary overall appeared to be highly favourable to Sanders, with a higher than usual proportion of independents taking part and few minority voters, who have tended to lean toward Clinton.

A similar mix of voters helped Sanders claim a surprise win in Indiana last week and is expected to favour him again in Kentucky and Oregon next Tuesday.

Clinton meanwhile is hoping for wins in the delegate-rich states of New Jersey and California on 7 June to put her lead safely out of reach going into the party convention in Philadelphia this July.

Sanders is already campaigning hard in California, where he hopes there is still a slim chance to catch Clinton in pledged delegates and then apply moral pressure to persuade superdelegates – mostly party officials favouring her – to change their minds before the convention. But with just 11 contests between them remaining, there is little time left to close either gap.

The Vermont senator has instead also been making the case that he performs better than Clinton in opinion polling against Trump.

At a rally in Stockton, California, on Tuesday, Sanders pointed to a Quinnipiac University swing state poll suggesting Clinton might lose to Trump in Ohio, while he would have a six-point lead over the presumptive Republican nominee there.

In states such as Ohio and West Virginia, concern over trade and the economy has tended to favor both Sanders and Trump, while Clinton has also been hurt by comments suggesting she sees further erosion of jobs in the coal industry as inevitable.

The former secretary of state’s poor performance over Sanders in West Virginia is in stark contrast to her emphatic win over Barack Obama in the 2008 Democratic primary in the state, when race was seen as a key factor for some voters.

Watch Sanders' speech in Stockton, as posted online on Tuesday, below. His remarks begin around the 35-minute mark of the video.