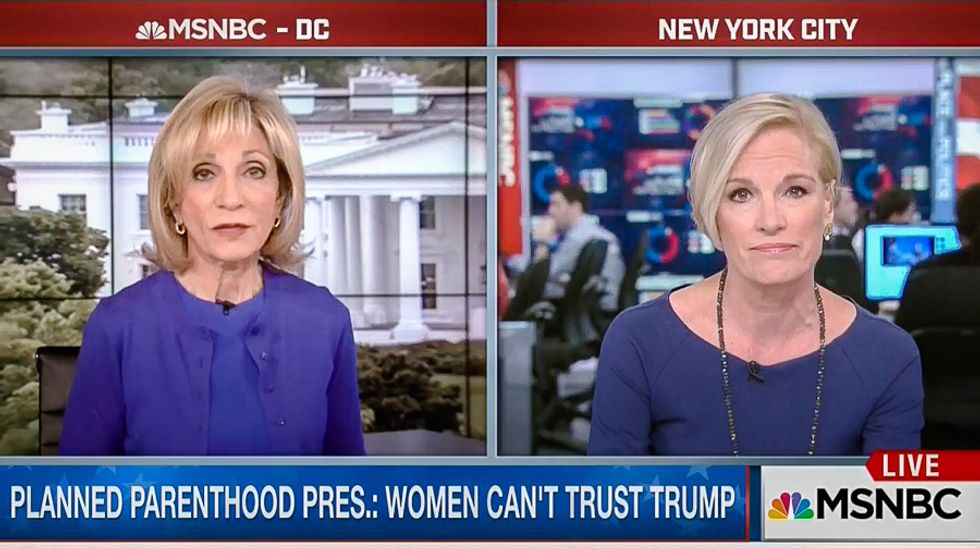 Planned Parenthood CEO Cecile Richards was put in the position of defending Hillary Clinton's personal life during an interview with MSNBC's Andrea Mitchell on Monday.

After presumptive Republican presidential nominee Donald Trump accused Clinton of being an "enabler" of her husband's alleged affairs, Mitchell asked the Planned Parenthood CEO to defend "the most controversial moments" of Hillary Clinton's tenure as first lady.

"It's very distressing to see that one that's running for president of the United States would be so completely disrespectful and dismissive of women," Richards explained. "And particularly a woman that's been secretary of state, she's been a United States senator. She's a woman who's had incredible experience and committed her entire life to public service, and he shows her absolutely no respect."

Richards added: "I don't think it's that surprising, but I think for him, I don't know how he thinks he's going to win an election when a majority of the voters in this country are going to be women next November."

Mitchell, however, was not satisfied with that answer.

"Isn't it possible that some women -- perhaps younger women, perhaps others -- might not respect Hillary Clinton for the way she stood by Bill Clinton?" the MSNBC host suggested. "And according to Donald Trump's analysis, you know, enabled [Bill Clinton] -- whatever that means."

"Absolutely not," Richards replied. "This is not an issue on anyone's mind. What women are thinking about is issues that our patients at Planned Parenthood think about. They're not getting equal pay in this country, there is no access to affordable child care, they need access to health care. There are now 24 states that are trying to end their access to basic birth control and cancer screenings."

"These are the issues that are on the mind of American women," she pointed out. "And Donald Trump, instead of actually address those, he's going after this personal attack on Hillary Clinton. It's absolutely not going work. And it's not what the American voters want to hear about."

But Mitchell turned back to Clinton's personal life: "How does she avoid responding to this?"

"I have full confidence she'll know how to deal with Donald Trump on the debate stage," Richards insisted. "He actually doesn't have a plan for America. The only thing he knows how to do -- and it was evident in the Republican primary is just simply cut down his opponents."

"And the American voters in November are going to look for who do they want to lead this country."

"How will Bill Clinton handle these kinds of attacks?" Mitchell pressed.

Watch the video below from MSNBC's Andrea Mitchell Reports, broadcast May 9, 2016.