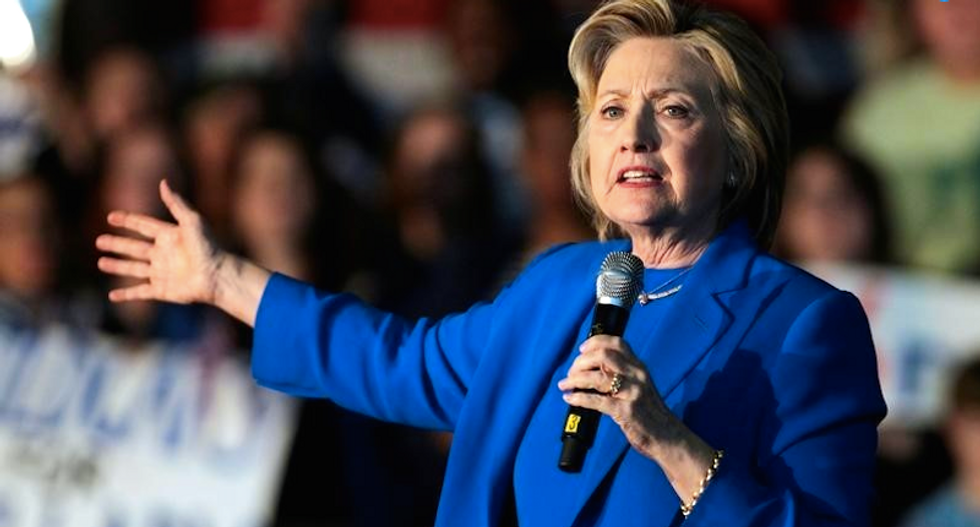 Clinton's campaign released an ad with audio the presumptive Republican nominee had recorded in 2006 for the now-defunct Trump University. Trump, a billionaire real estate developer, said of a "bubble burst" that he "sort of hope that happens because then people like me would go in and buy" property and "make a lot of money."

Clinton's campaign and her surrogates have seized on the recording to argue that she would take better care of the U.S. economy. She is seeking to blunt the inroads that Trump has been making with voters in crucial states such as the Florida and Ohio.

Opinion polls in key states show Clinton, the front-runner for the Democratic nomination, and Trump are in a tight race ahead of the Nov. 8 U.S. presidential election. Nationally, Trump has been rising in polls to pull roughly even with Clinton.

Clinton surrogates from Ohio and Florida held a conference call with reporters about Trump's statements. Her campaign also hosted related events in Virginia, Pennsylvania, New Hampshire, Iowa, Colorado and Nevada, which will all be battlegrounds in November's general election.

"How could Trump possibly champion the collapse of the housing market and our economy?" U.S. Representative Tim Ryan of Ohio said on the call.

In Florida, 1.5 million lost homes and more than 800,000 lost jobs, Tampa Mayor Bob Buckhorn said on the call, characterizing the state as "ground zero" of the housing crisis.

Trump's campaign did not immediately respond to a request for comment.

Clinton, meanwhile, is still fighting on two fronts as she seeks to wrap up her primary battle with Democratic rival Bernie Sanders, a U.S. senator from Vermont.

Clinton and Sanders both campaigned Tuesday in California, which is among six states holding Democratic nominating contests on June 7. California has more Democratic delegates than any other state, and Sanders has invested heavily there.

Clinton needs to win California for a strong finish heading into her party's national convention in July and to dispel questions about whether she can united the party after a drawn-out, increasingly bitter primary race.

Clinton on Monday turned down an invitation by Fox News to debate Sanders in California despite having agreed previously to a May debate. Her campaign said Clinton's time would be better spent meeting directly with California voters.

The Democratic Party said this week it would give Sanders a prominent role in writing its platform this year in a move to appease the progressive voters he has successfully courted during his campaign.