Clinton mocks Trump's bankruptcies: 'How can anybody lose money running a casino?' 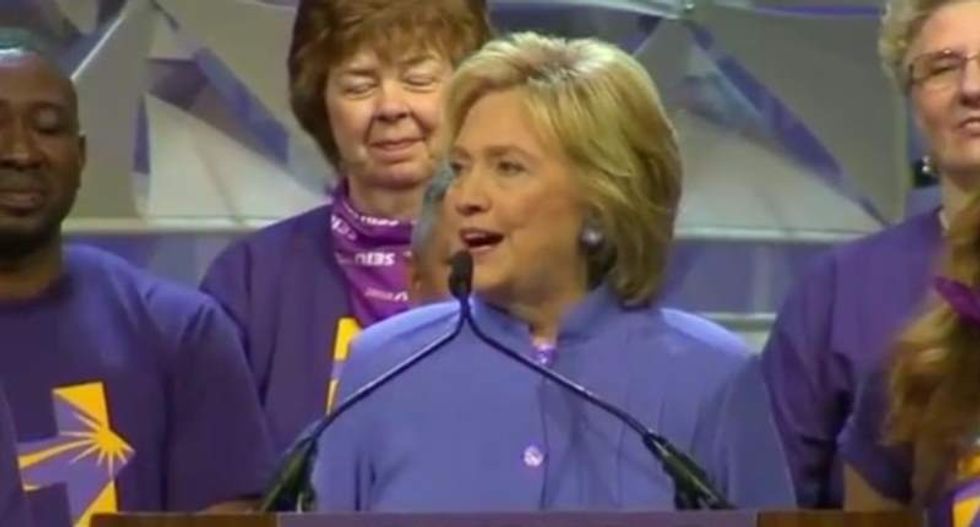 Hillary Clinton speaks at the Service Employees International Union convention on May 23, 2016. (YouTube)

Clinton also criticized ‘Trump economics’ during event in Detroit with Service Employees International Union, which has endorsed the Democratic candidate

Hillary Clinton launched a no-holds-barred attack on her likely general election opponent, Donald Trump, in a speech laced with explicit warnings about the dangers of electing him to the presidency.

The former US secretary of state returned to Detroit on Monday to address the Service Employees International Union’s international convention and ask its 2.1 million workers for help in defeating Trump.

“Trump economics is a recipe for lower wages, fewer jobs, more debt. He could bankrupt America like he has bankrupted his companies,” she told a crowd of roughly 3,000 members, all wearing their purple union shirts. The SEIU has endorsed Clinton for president.

She paused, smiled and threw a punch: “I mean ask yourself how can anybody lose money running a casino? Really?”

For the first time, polls suggest Trump may have edged just slightly ahead of Clinton, setting up a battle royal between two historically unlikable candidates.

Clinton’s fighting words in the Motor City envisage a general election battle in which Michigan and the Rust Belt states are very much unsettled. Trump demonstrated his strength with working-class white voters with a sweeping victory in the state in March, while Clinton narrowly lost to Sanders in one of the biggest upsets of the election, thanks in part to her vulnerabilities with the same bloc of voters.

In her speech, Clinton thanked her Democratic opponent, Bernie Sanders, for “challenging” the party to fight harder to get big money out of politics and reign in Wall Street. Sanders has vowed to continue his now-improbable quest for the nomination despite pressure from party leaders for him to drop out and help unite the party behind Clinton.

Last week, Clinton sharpened her attack on Trump when she called him “unqualified” for the presidency. On Monday, she told union members: “The only thing standing between Donald Trump and the Oval Office is all of us.”

She added: “We need a president who will use the bully pulpit to stand up for working families. But the last thing we need is a bully in the pulpit.”

Clinton continued in that vein, pummeling her opponent for his economic vision and immigration policies, especially his plan to deport 11 million undocumented immigrants.

“What kind of country would we be if we let Donald Trump rip our families apart?” she asked. “We have to reject this wrong vision for America with a strong, clear voice.”

She directly appealed to America’s workforce for support, hinting at a growing trend of union members breaking ranks and supporting Trump.

“Hear this because you need to tell your friends,” Clinton said, as she reminded them that Trump once suggested wages are “too high”.

“Donald Trump actually stood on a debate stage and argued that Americans are being paid too much,” Clinton said.

A network of powerful union leaders, including SEIU’s president, Mary Kay Henry, have launched a concerted attack on the presumptive Republican nominee, painting him as a false prophet, someone who promises to bring back jobs but has no plans to achieve that.

Introducing Clinton, Henry pledged:“We are going to use every ounce of this union’s energy to ensure that she is the next president of the United States.”

Clinton in turn lauded the workers.

Watch Clinton's speech in its entirety, as posted online, below.