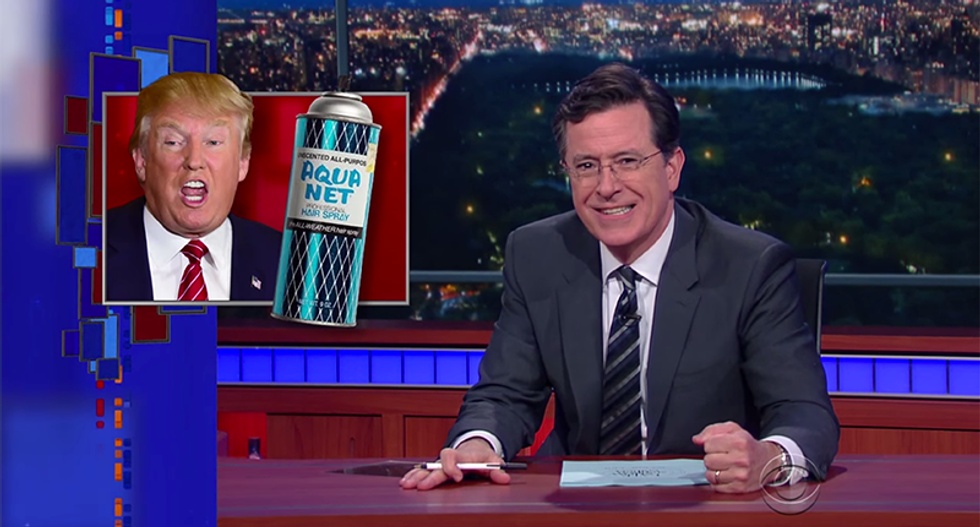 Donald Trump wouldn't know a coal mine if he fell into one, and Stephen Colbert couldn't let the pandering continue without comment.

The worst part of Trump's coal miner endorsement over the weekend came when Trump told a crowd full of people not to worry about voting Tuesday in the West Virginia primary. "Save your vote for the general," Trump told the audience, obviously, forgetting that there are more elections than his.

"Yes! It's an inspiring message," Colbert mocked. "It reminds me of Patrick Henry's immortal battle cry, 'Give me liberty, or don't. Forget this one. I don't give a crap.'"

Trump followed the audience's requests to put on the West Virginia Coal Association hardhat and then he pretended to shovel coal. "Wow, he really looks like a miner. Right down to that orange soot all over his face from years in the Dorito mines. And I'm sure all the coal miners there related to this motion," Colbert said mocking Trump's attempt at pantomiming a shovel. "Then they go out after work and play lacrosse."

But Trump showed he knows the No. 1 health crisis facing these miners: Hat hair. Once he took the hard hat off, his hair was all he could talk about. "Is my hair okay?" he asked the audience. "Got a little spray. Give me a little spray. You know you're not allowed to use hairspray anymore because it affects the ozone, you know that right? In the old days, you just sprayed it and it was good. Today you put the hairspray on and it's good for 12 minutes, right? I said, ‘Wait a minute, so if I take hairspray and I spray it in my apartment which is all sealed, you’re telling me that affects the ozone layer?’ Yes? I say no way folks. No way."

That is indicative of a man who obviously spent years inhaling air from a poorly ventilated room. "I was surprised to see Trump so hung up about hairspray. Because I looked it up, and the type of hairspray that destroys the ozone was banned in 1978. So, Trump has been mad about hairspray for 38 years!" Colbert said. "To put that into perspective, a woman born in 1978 would have been married and divorced from Donald Trump by now."

Colbert said that he couldn't wait to see the rest of Trump's 1978 platform. It'll probably have to do with Tab not tasting as good and saccharin giving rats cancer. "I miss flammable pajamas. It made smoking in bed much more exciting," Colbert joked doing his Trump impression. "Why do we have to wear those seatbelts with the stupid shoulder straps? Lapbelts work just fine! I like my head to slam into the dashboard!

He then welcomed an actual coal miner on to talk about his support for Trump. Apparently, the man was going to vote for Trump until he told the man not to. He thought Trump was just an out-of-touch billionaire, but then he put on that hat and the miner saw he was just a regular hat-wearin' guy who's head can hold a hat. As a coal miner, he really cares about beautiful hair.

Check out the rest below: