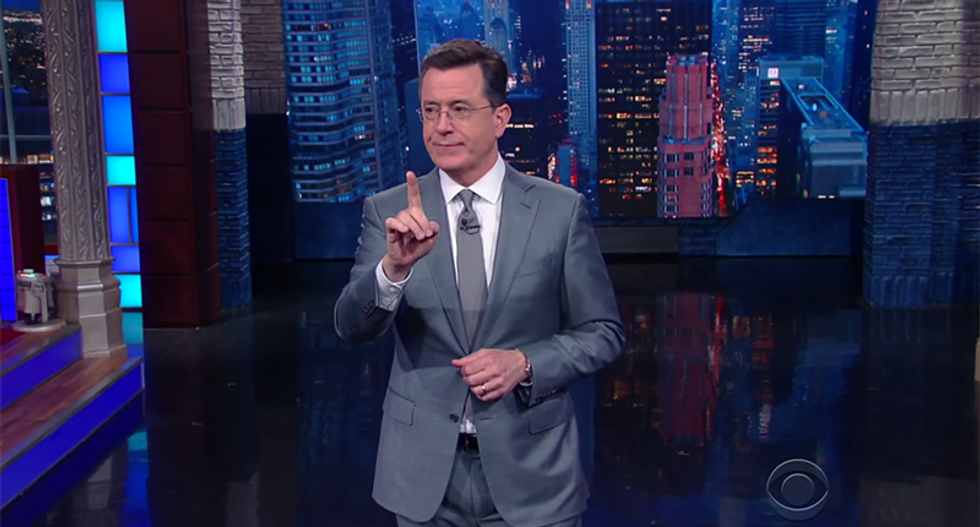 According to the latest polls, this summer is going to suck, thanks to the presidential campaigns. They show Donald Trump and Hillary Clinton neck and neck with 10 percent of undecided respondents begging for death, according to Stephen Colbert on Monday's "Late Show."

So, Trump and Clinton are already attacking each other, "which will make things really awkward when she attends his next wedding," Colbert joked.

The latest attacks are over guns. Friday, Trump was endorsed by the NRA and gave a speech about doing away with gun-free school zones. Clinton expressed her outrage. "Then Trump expressed his outrage at her outrage," Colbert said.

"So, no guns in classrooms, unless guns in classrooms," Colbert said, clarifying Trump's position. "I think we just heard Donald Trump's education plan: Kids will learn math by counting how many different positions he takes in one sentence."

Arming teachers in classrooms isn't a new idea. People have said since the early days of school shootings that teachers should have guns or tasers, "basically any kind of weapon other than a living wage," Colbert said.

"We should have seen this coming," Colbert said, before running a clip of Trump saying how much he loved the poorly educated. "There's a good chance he's going to be president," Colbert said, laughing uncomfortably.

Check it out the hilarity below: