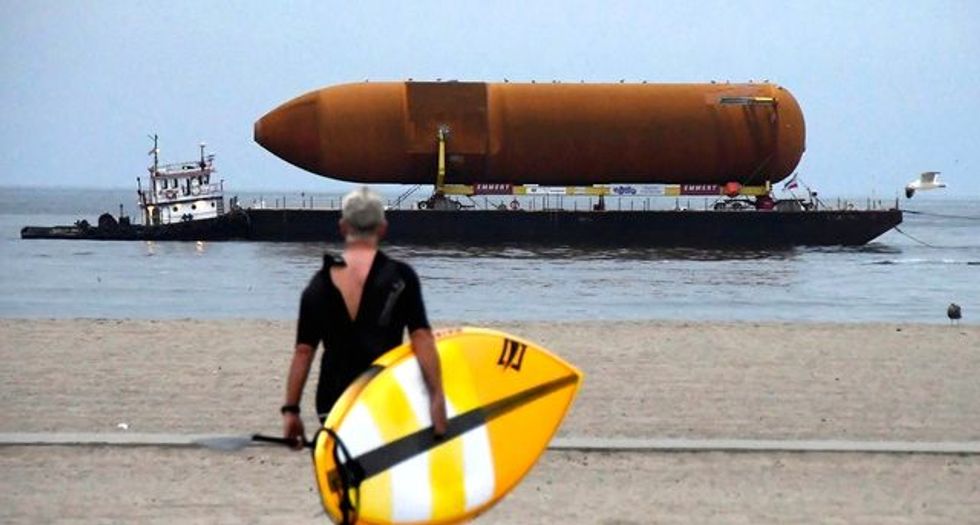 A paddle boarder makes his way to the water as the space shuttle fuel tank ET-94 arrives by barge for its eventual placement at the California Science Center in Marina del Rey, California, U.S., May 18, 2016. REUTERS/Gene Blevins

A giant orange NASA fuel tank began its final journey on Saturday, along city streets to a Los Angeles science center where it will be displayed with the space shuttle Endeavour.

The California Science Center has called the mission "ET Comes Home," in a play on the "external tank" name and the 1982 movie "E.T. the Extra-Terrestrial."

The transport is a sequel of sorts to the 2012 mission to tow Endeavour from the Los Angeles airport to the science center, a project that captivated crowds of onlookers.

But the 65,000-pound (29,484 kg) fuel tank, which is 154 feet (47 meter) long, is neither as wide nor tall as the space shuttle, which museum officials said means it can more easily squeeze through city streets as it is towed by truck on rolling dollies from Marina del Rey, where it had arrived on a barge.

ET-94's route will take it past a major highway and cover more than 16 miles (26 km) to the California Science Center just south of downtown Los Angeles, in a journey that is expected to end on Saturday evening, the museum said.

The U.S. National Aeronautics and Space Administration (NASA) donated the fuel tank, which was designed to carry propellants to thrust a space shuttle into orbit and then detach, mostly disintegrating as it fell to the ocean.