Fragment of 50,000-year-old axe uncovered in Australia: 'Without doubt the oldest axe in the world' 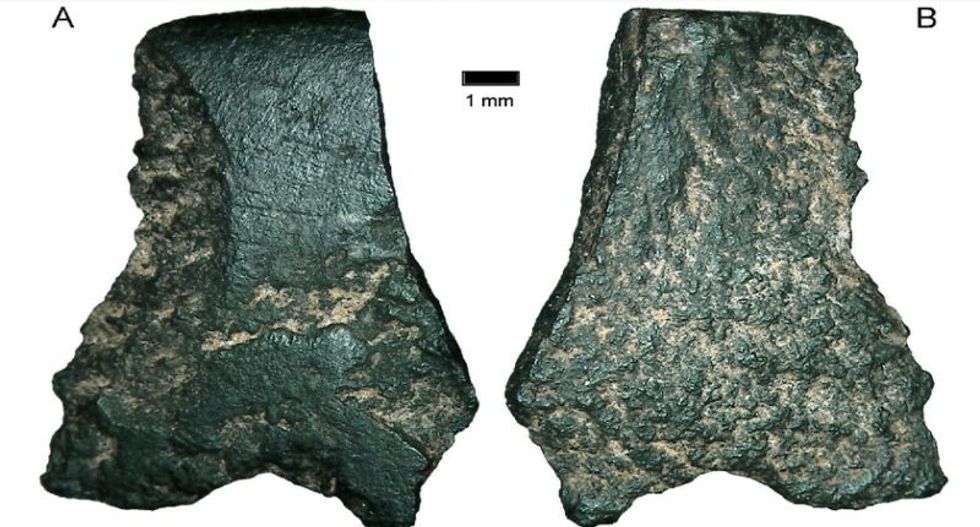 A fragment from the world's oldest known axe unearthed in Australia likely dates from just after humans arrived in the country around 50,000 years ago, scientists say (AFP Photo/)

A rock flake found in Australia is believed to be from the world's oldest known axe and likely dates from just after humans arrived in the country around 50,000 years ago, scientists said Wednesday.

The fragment, about the size of a thumbnail, was found in Western Australia's sparsely populated Kimberley region and its age indicates that early indigenous technology was novel and inventive.

"This is without doubt the oldest axe in the world," Peter Hiscock, the University of Sydney academic who analysed the fragment, told AFP.

The piece was excavated in the 1990s, but it was not until recently that its significance was recognised and confirmed by new technology.

"It's a relatively small fragment, it's not much more than a centimetre (half an inch) long," said Hiscock, who used a digital microscope to analyse the piece and determine it was man-made.

"It's one flake off the edge of a polished axe or a ground-edge axe."

It's probably indicating that this is at, or just after, the arrival of humans (in Australia)."

The findings appear in Australian Archaeology.

Hiscock said it was interesting that the earliest appearance of axes in Australia appeared to coincide with the arrival of humans in the landscape.

"The coincidence of the timing of the arrival of humans and the appearance of axes shows an inventiveness," he said.

"So people moving out of Africa didn't have axes. They arrive in Australia and they invent this technology. It shows that there was novelty, the capacity to innovate."

He added that the axe fragment was not the first of its type found in Australia and showed that the nation's indigenous peoples' ancestors were good at creating the tools they needed.

"I think that this tells us that axes were invented by the early settlers, the ancestors of Australian Aboriginals," he said.

Australian National University professor Sue O'Connor, who found the piece in the 1990s, agreed that it was the earliest evidence of a hafted axe -- one with a handle attached -- in the world.

"Nowhere else in the world do you get axes at this date," she said in a statement, adding that while such axes had appeared about 35,000 years ago in Japan, in most countries they arrived with agriculture within the last 10,000 years.

"Australian stone artefacts have often been characterised as being simple," she said.

"But clearly that's not the case when you have these hafted axes earlier in Australia than anywhere else in the world."

The piece comes from an axe that had been shaped and polished by grinding it against a softer rock such as sandstone, the ANU said.