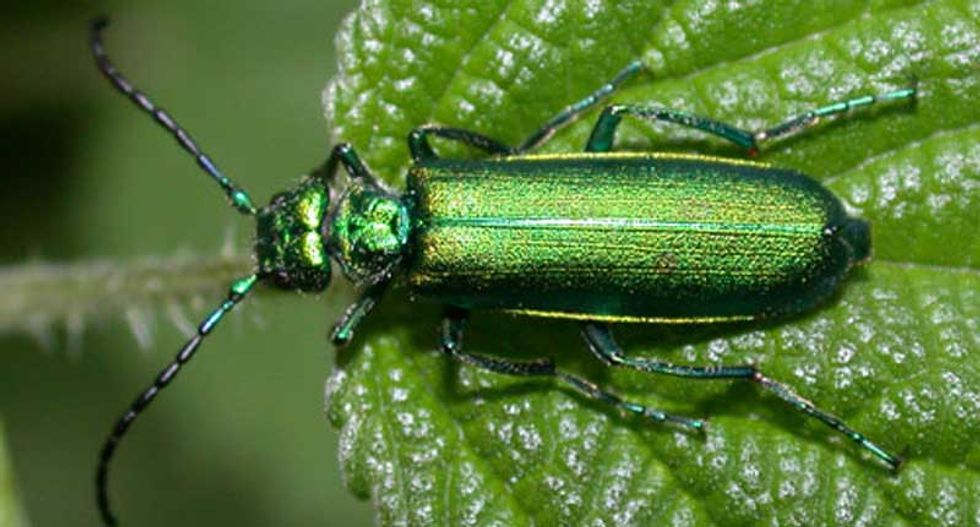 I've always been jealous of boys, envying what seems like the ease of male biological life: no periods, no fear of pregnancy and all your junk is on the outside so your doctor doesn’t have to go tunneling, like she’s breaking out of Shawshank, to find out what’s up with your cervix.

But men don't have all smooth sailing physically. Back in the day, many of the remedies they were stuck with to help with erectile dysfunction were either gruesome, ghastly or just plain goofy and seem like they’d have the opposite effect from the one desired.

Here are 10 that are bound to make many men — and their honeys — more grateful for Viagra than they already are.

In a round-up of potential natural aphrodisiacs, Christopher Wajek at LiveScience says this alleged elixir is made of crushed blister beetles. He doesn’t recommend it: It contains cantharidin, a caustic juice that burns the urinary track.

In Overcoming Impotence: A Leading Urologist Tells You Everything You Need to Know by J. Stephen Jones, the author lists side effects including seizures and rectal and internal bleeding, possibly resulting in death, and notes it was a “favorite snack” of the Marquis de Sade.

Magic wands do work … as long as they’re attached to an electrical outlet.

At least that’s what a lot of people thought in the early 20th century, when the Violet Ray was a cure for everything from dandruff to rheumatism to impotence.

The device was a Tesla coil inside a wand which glowed violet inside a glass tube, emitting a pleasant warm energy with curative powers, which doesn’t sound so bad at all.

And depending on your limits, it might not have been. The device came with tubes and attachments, and one manual simply recommends using certain attachments and hovering the wand over the spine. Another manual from the 1930s, though, recommends inserting the well-lubed tube into the rectum “about six inches,” with details about positioning.

For some guys just the description might worsen the problem. For others: dream date.

3. Pissing off the janitor: Magic

In Magic and Impotence in the Middle Ages, author Catherine Rider describes a 13th-century instance wherein a Parisian man was made impotent because his ex uttered an incantation over a lock and key, throwing the lock in one well and the key in another.

I’m going to Target to buy a couple of locks, and while I’m gone you can enjoy the fact that his problem was allegedly cured simply by the lock and key being reunited. In a later period, “one cure for magically-caused impotence was for the man to urinate through the keyhole of the church where he was married.”

The only thing I find surprising about this is how big keyholes must have been in the Middle Ages.

That’s why, about 400 years later in the 16th century, people were still blaming magic for impotence — only, according to Angus McClaren’s Impotence: A Cultural History, “the cure had to entail the death of the witch.”

Nestled in Neatorama’s story  about the early-20th-century craze for radium products are a few lines about the “radioendocrinator,” a small device that purportedly cured impotence using radium. Men were instructed to place the small, rectangular device under their scrotum and, presumably, become radiant with sexual powers.

The Historical Instrumentation Collection website shows the radioendoctrinator in all its gold-plated glory, about the size of a flip phone in a gold-embossed case.

The source of the radium was “seven or so radium soaked blotter-like pieces of paper about the size and shape of credit cards. These were covered with a thin piece of clear plastic and two gold-wire screens. As might be expected, it did leak and the inside of the case is mildly contaminated.”

Clearly there was a miscommunication: we want a grower, not a glower.

When we say a guy’s got balls, presumably we mean just his own, not some monkey’s.

Roisin Kiberd writes in Motherboard about two surgeons who convinced gullible and needful men that transplanting the glands of goats and monkeys was the way to reclaim their sexual vigor.

Paris surgeon Serge Vonorhoff started off by transplanting “the testicles of executed criminals into living millionaires,” Kiberd writes, but eventually turned to monkeys, inserting, for example, the segmented glands of a baboon into the scrotum of a septuagenarian man. By 1925 he claimed to have done 1,000 of these “xenotransplantations.”

His counterpart of “interspecies grafting” in America was John Brinkley, who transplanted goat glands into men and marketed his procedure with snob appeal: his operations, he claimed, were better suited to men of intellect.

The implant surgeries are detailed in Sex, Drugs and Rock n’ Roll: The Science of Hedonism and the Hedonism of Science by Zoe Cormier.

In Impotence: A Cultural History, Angus McLaren lists some genteel methods like sitting in a cool cane-bottomed chair, eating a modest diet and getting married. More sinister methods included “painful cauterizations and blistering of the penis” and “inserting bougies (thin, flexible surgical instruments) and catheters up the urethra.”

You can see a drawing of an “anti-masturbatory device” on page seven of the Textbook of Erectile Dysfunction, second edition, alongside something called the “penis scaffold,” which is actually a support, and not the“off with his head” sort of thing it sounded like to me on first reading.

Long before the Violet Ray, as far back as the 1870s, doctors were using electrical devices to address ED.

The Body Electric: How Strange Machines Built The Modern American by Carolyn Thomas Pena describes “galvanic baths” in which one Dr. George Schweig would have patients get into “tubs of water with electrodes submerged below the surface.” Other doctors applied electric current to the penis and scrotum or to the entire body.

By the early 20th century, men were wearing electrical belts and gathering increased vitality from having their junk constantly zapped.

Check out this promotion for Dr. Sanden’s Electric Belt and Suspensory for Weak Men, courtesy of Vintage Ads, to get a look at what the fashionably buzzed man was wearing.

9. For Tigers Only: Tiger Penises

It doesn’t take a Sherlock Holmes to notice that a lot of animals give their all to quack cures for human male virility. One of the saddest is the erroneous notion that eating tiger penises will make you a tiger in bed.

It doesn’t work, but if you thought it did, how would you even know a tiger penis if you saw one?

Riveting reading — though not for the squeamish — is the U.S. Fish & Wildlife Service report by Bonnie Yates, “Distinguishing Real vs. Fake Tiger Penises: Identification Guides for Law Enforcement No 6.”

Yates, a recently retired wildlife forensic scientist, wrote in this 2005 report about how animal penises are important in many traditional medicines, how they’re prepared and how the organs of other animals, typically cattle, are often fashioned to look like tiger penises and passed off as the real thing. It gives a lot of detail, with photos, of how to tell a tiger penis from an imposter.

Genuine tiger penises are tough to identify, Yates writes, because most people have never seen the real thing. “To date,” Yates writes in the 2005 guideline, “no dried penis from an actual tiger has been seen in the Lab as evidence in a wildlife case.”

On one hand it’s kind of nice to know they got a lot of fakes. On the other, it’s truly sad that there’s a high enough demand to warrant any of them at all.

Finally, a quickie but a goodie.

In The Viagra Alternative: The Complete Guide to Overcoming Erectile Dysfunction Naturally,  Marc Bonnard, M.D. talks about size anxiety causing difficulty getting erections and notes the Kama Sutra’s inflation recommendation, which includes “rub[bing] your penis with wasp stings,” then sweet oil, letting it dangle through a hole in your bed for 10 nights and then applying a cool ointment to relieve the swelling.

Honestly, it would be a lot quicker to just believe that women still don’t care about penis size.