Hodor, ‘Game of Thrones’ and how the ‘time travel’ trope ruins every great story 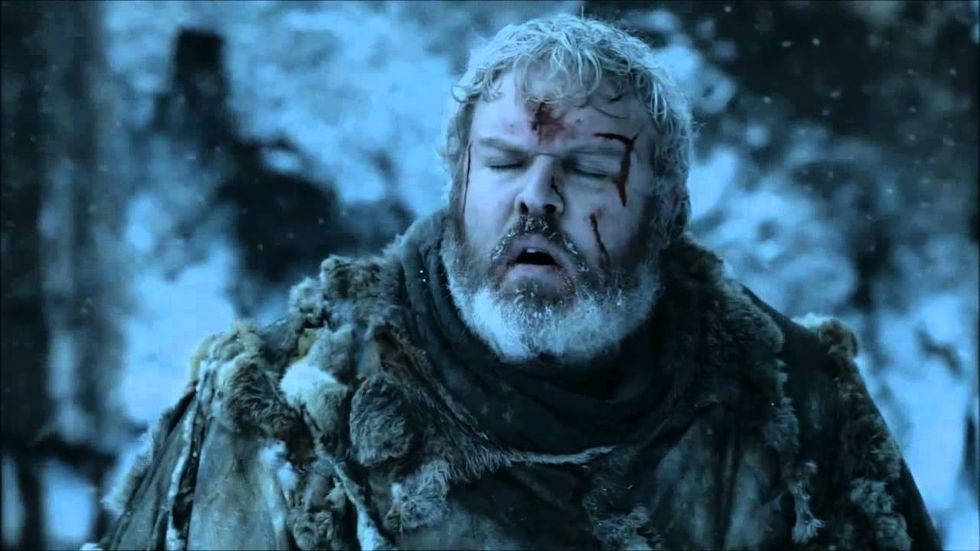 WARNING: GAME OF THRONES SPOILERS AHEAD.

On Sunday night, my Facebook feed erupted into a lava flow of grief as the first wave of Game of Thrones (GOT) watchers on the east coast, forgetting the rules about time zones--told everyone else on Facebook, many of whom had not had chance to watch the show, that Hodor had been killed holding the door. For many of my FB friends, this episode ranked up there with the Red Wedding and the death of Jon Snow as the most gut-punching episode in the series’ five years.

While Hodor’s death ripped out a lot of viewers’ hearts, one astute re-capper saw it as the moment of the reveal for a huge catalyst that has triggered an enormous part of the show’s storyline. Those who want to join the discussion about whether she’s correct in her assessment should check out Awesomely Luvvie and her crew of GOT fans.

And yet no one on Facebook mentioned the literary gut punch of watching a well-written television show resort to such a commonly used trope that it sped right past cliché to arrive at  "It was a dark and stormy night" awful.

Tropes are not in and of themselves awful. Like their metaphorical cousin--the motif--they can often serve to link a metaphor to an idea that may seem timeless or universal. At TVTropes, they write:

"Above all, a trope is a convention. It can be a plot trick, a setup, a narrative structure, a character type, a linguistic idiom... you know it when you see it. Tropes are not inherently disruptive to a story; however, when the trope itself becomes intrusive, distracting the viewer rather than serving as shorthand, it has become a cliché."

The use of Bran's dream/time travel to understand Hodor's fate became a distracting cliche. When a piece of artistic production—literature, film, television, comic books, etc.—uses time travel to reveal to a protagonist the past, previously unknown event (see: deus ex machina--or not. It's debatable if Hodor's death is that significant.) that set the current situation into motion, writers know that they're straying into tired territory. That's not to say that it is not an unusual longing in real life:  the desire to go back in time to fix the event that is breaking your heart is common. Whether it’s going back to talk to the young child that becomes your grownup daughter and warning her not to get into the car that’s going to crash, or going back and telling your father to stop smoking the cigarettes that killed him, or further back in history—to prevent the assassination of JFK or make Hitler into a successful painter so he wouldn’t become a genocidal maniac—the desire to change the past to prevent current pain has been well explored. The variations on time travel and its impact on the future are familiar territory for writers.

In fact, there are so many versions of the time travel trope in literature that the website, TV Tropes, lists 78 different time travel tropes—and then for each, provides the names of shows, books, and episodes—that fit within these tropes. And those are just the ones related to time travel.

For example, in the trope it labels “Have We Met Yet?” in which a character goes back in time and meets another character in the past who they will meet and know well in the future, the page lists these examples from just the medium of television:

15 separate episodes of Dr. Who

Star Trek: The Next Generation

It also lists six novels and two films that specifically feature this trope.

For those who argue that Bran was dreaming, and not actually traveling back in time, a number of "dream" tropes pop up. Dreams figure in tropes almost as often as time travel does. For those of us of a certain age, the most egregious use of dreaming was the infamous scene in the nightime soap, Dallas, where Bobby Ewing’s death and subsequent absence from the show (while star Patrick Duffy toyed with doing something else), was explained by Pam Ewing’s realization that she had dreamed every single thing that had happened on the show since Bobby’s death, thus wiping out all the plot lines that had developed during that extended time.

But, in the case of Bran and Hodor, the more proper trope may be “Dreaming of Times Gone By,” which also has a fairly large representation in literature. A partial list of “literature” examples are:

Multiple examples in Lord of the Rings

The Throne of Fire

Those who are interested in nailing down exactly which trope is represented both by Bran’s dream of the origins of Hodor’s name and the other trouble Bran caused while in his dream, are invited to spend time at TVTropes exploring the various facets of the device.

Perhaps it’s not unexpected in fantasy that in a land where there are dragons, there might also be magic that makes it possible to go back in time. If a wizard can make a magical beast, why not be able to send someone back through time to observe the past first-hand?

This past week, however, PBS began airing a series hosted by Physicist Stephen Hawking, who sends three “ordinary” people out to conduct thought experiments where they will experience their own moments of “genius.” The first episode of Genius explored whether it is possible for humans to travel in time. After all, so many science fiction plots, including the entire Star Trek universe, are built upon the bending of space and time in order to warp across the universe in seconds rather than light years.

Watching the episode is well worth the 50-minute investment in time. I won’t spoil for viewers the conclusions that Hawking and his assistants come to, but suffice it to say, I was surprised by the real possibilities of time travel. One thing to keep in mind about time is that, like any three dimensional object that has height, width, and depth, you can pinpoint its location. (Think of an x,y,z axis and how that works.) Time is the fourth dimension, and it’s the one that is most affected by gravity. How to manipulate time turns out to be a mind-blowing exploration of understanding what time is, something that when I start thinking about it, turns into one of those things that then makes me stop everything, plop down on my back in order to look at the sky, question my existence.

Game of Thrones has been able to attract its devoted followers by presenting well-written, well-acted new twists on seemingly timeless stories. I would hate to see it lose its way by resorting to tired, predictable plot twists that would make it just another average television show.