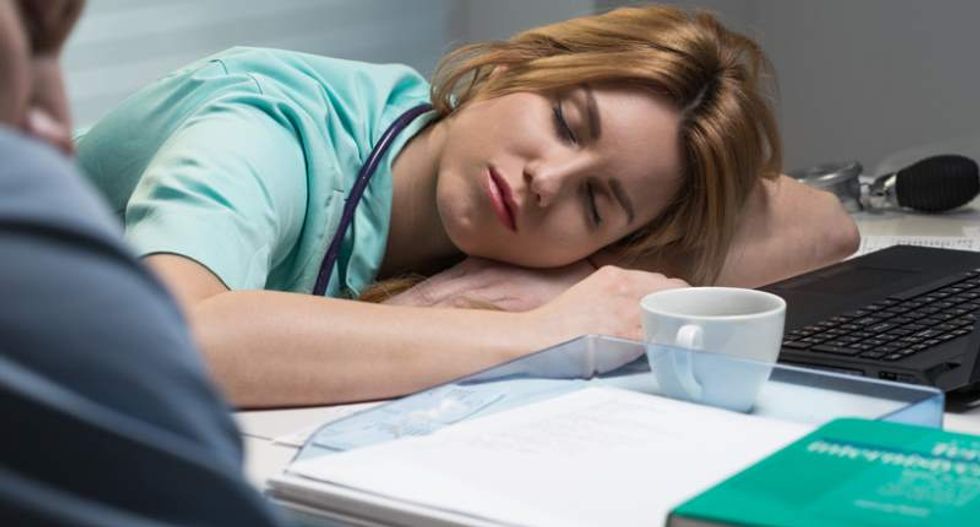 One late night, in a hospital in South West England, a neurologist retreated to the on-call room to get some shuteye. Soon after falling asleep, she was awoken to manage a patient who'd gone into cardiac arrest. The neurologist proceeded as usual: She resuscitated the patient and wrote up case notes. The next morning, someone told her that the patient was doing well and had eaten breakfast. The neurologist might have been pleased had she not been so surprised — she had no recollection of the patient or the time she’d spent shocking his heart into rhythm.

The neurologist suffered a bout of what two UK researchers have dubbed “fatigue amnesia,” defined as “transient amnesia in the context of prolonged activity and sleep deprivation.” In other words, it occurs when someone is so sleep deprived they have no memory of certain tasks. A new paper, published in the journal Cortex, describes four instances where doctors lost all memory of providing medical care within hours of scrubbing out.

Fleeting memory loss is by no means absent from the medical literature. It’s well-documented, for example, that injuries, stroke, drug use and migraines can trigger brief amnesia episodes. But, until now, fatigue amnesia hasn’t been recognized, according to study co-author Adam Zeman, a cognitive neurologist at the University of Exeter Medical School. Zeman has a history of homing in on un-named medical phenomena. In 2010, he published the first-ever case study of Aphantasia, which describes an inability to visualize images.

Six years later, Zeman’s adding another mysterious, and perhaps quite rare, condition to the annals of huh-inducing medicine. But, unlike Aphantasia, fatigue amnesia is less a biological quirk than a situational affliction of the overworked and underslept. Or that’s what the paper suggests. Two of the other cases involved a geriatrician who lost all recollection of a late-night patient by morning rounds and a microbiologist with a similar tale.

The three forgetful physicians' amnesia episodes share several features. For starters, they occurred toward the end of long shifts during which the doctors likely caught minimal, scattered Zzzs. (The UK, study authors noted, has since updated policies regarding medical shift limits.) And, their accounts bear a similar pattern of memory loss. The doctors saw patients, furnished critical care and held onto the experiences long enough to jot down accurate, thorough case notes after the fact. Across the board, the doctors responded to wake-up calls appropriately and did their jobs competently — they just had no idea any of it happened.

Their memories didn’t fail off the bat. The fact that they entered case notes, Zeman and co-author Sonali Dharia wrote, suggests that they successfully "encoded" their patient interactions, meaning they absorbed and retained what happened. Something misfired, however, during memory consolidation, the process of converting newly learned information and experiences into long-term memories. Researchers interpreted the phenomenon as a “novel form of accelerated long-term forgetting, whereby a memory for events is acquired normally but then decays more rapidly than usual.”

What’s most striking, researchers wrote, is that the doctors could entirely forget such attention-demanding tasks — documented in writing — within a few hours.

At this point, Zeman and Dharia can only speculate as to the brain glitch underlying fatigue amnesia. But, they offer insights from neuroscience and memory research. One well-regarded theory says the primary neurobiological function of sleep is “renormalization.” During the day, we absorb all sorts of facts and faces and feelings. Or, in a word, we learn.

Let’s back up. The concept of plasticity tells us that brains change through experience. Learning increases brainpower, so to speak. When we learn new information and skills, we strengthen synapses (the connections between neurons that transmit chemical messages). We even build new synapses, a process called neurogenesis. But, our brains need breaks between periods of active learning to clean shop and dispose of weak synapses (unnecessary garbage thoughts). That way, we can lock in the most important information. And we lock in that info by consolidating it into a long-term memory. This happens, of course, during deep sleep.

When doctors work a 24-hour shift on scant rest, constantly challenging themselves to hit the right arteries and make sense of diagnostic riddles, they exhaust their synaptic plasticity, researchers posited. The overworked MDs basically hit their capacity for jamming in information without getting enough time to clear their neural decks. As a result, the important memories — say, the details of a four-hour-old heart transplant — don’t get consolidated.

Of course, it's hard to discuss fatigue amnesia without mentioning the ongoing debate over devising optimal shifts for hospital workers. Among other concerns, hospital administrators (and other healthcare experts) want to minimize on-the-job mistakes. Some research suggests that more patient-care errors occur during "hand-offs," when doctors and nurses switch shifts and take on new, unfamiliar caseloads, than when they're tired but well-versed in their appendectomy patient's drug allergies.

But, the cases of fatigue amnesia before us don't concern mistakes, per se. The doctors sprung into action and went to work as they were supposed to. This may not be surprising; research suggests that doctors work on autopilot even when they're alert and well-slept. The idea here is that they subconsciously use mental shortcuts called heuristics to make decisions. So, let's say a doctor needs to revive a trauma victim. Rather than logically think through each step of the process, weighing all the information available, they make gut-level choices that, based on their experience and knowledge, have a high probability of being correct. Then again, doctors need experience to fuel heuristic decision-making. If yesterday's "House, M.D."-level diagnosis doesn't become a consolidated memory, then how can it inform medical sleuthing going forward?