How science can help you prepare for a 4 a.m. 'rager' when you’re in your 30s 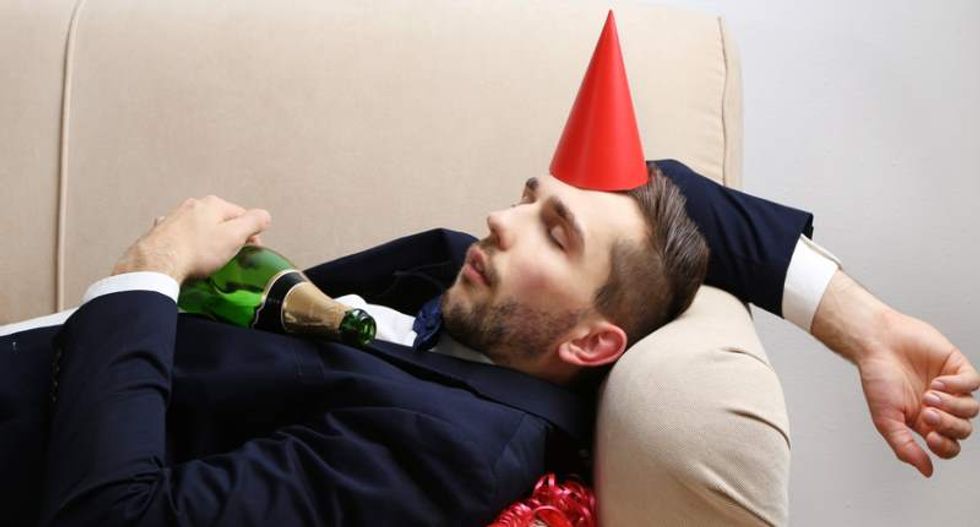 'Man on the couch after a party' [Shutterstock]

Unfortunately, one of the sad realities of getting older is that your ability to RAGE ALL NIGHT often devolves into RAGE BUT JUST UNTIL 11:30 PM. (Or more likely: not rage at all and instead sip a glass of Pinot Grigio while binge-watching the latest season of “House of Cards.”)

But just because our no-longer-22-year-old-bodies are less tolerant of a night of shenanigans doesn’t mean we thirty-somethings can’t still rock a rager every once in awhile. It just means that we have to prepare a bit more. (If it helps you come to terms with this new reality, think of it as a trade-off for no longer having to sleep on a twin mattress on the floor of a friend’s subletted apartment.)

So, if you’re in your 30s, here’s what you can do starting mid-week to get ready for a rager on Friday night.

Step away-yyy from the coffee.

By expelling caffeine from your system starting on Wednesday, you’ll be ready to bank some extra sleep before Friday night. Although you may have to deal with the caffeine withdrawal symptoms on Thursday, it may be worth it when you’re not wide awake at some ungodly hour, thinking, “how will I possibly even make it off my couch come Friday night?” A 2013 study showed that caffeine can have some serious disruptive effects on sleep, and thus if you want to ensure that you'll get as much sleep as possible, stop any of that delightful caffeine-intake at least six hours before bedtime.

Obviously, sliding into the end of the week having racked up several hours of sleep deprivation will prevent you from feeling your finest when you’re hitting the dance floor on Friday. Thus, if you’re truly wanting to rage until the wee hours of the morning at the end of the week, then it’s best to start sleeping more now. Maintain your hopefully healthy current sleep routine, plus tag on an additional 1-2 more hours tonight once again if possible. A recent study suggests that banking sleep can help tired runners maintain peak performance on race day.

Continue to rest up and bank extra hours.

By bingeing on sleep before you binge on fun and alcohol, you’ll ensure that your body and mind are definitely well-rested. (Side note: Bingeing on alcohol is never recommended.) When 2 a.m. on Saturday hits and you drop the karaoke mic, you want to make sure it’s because you just hit every note of, “Total Eclipse of the Heart,” not because you nodded off. As noted in a 2013 Wall Street Journal article, by sleeping extra before a night of no sleep you can offset some of those super lousy side effects of sleep deprivation.

Start planning the details of your night so you don’t get all adult-y and stress out.

In your early 20s — when you were probably still operating under the “let’s just see what happens” plan — if you ended up at a friend of a friend of a friend’s cousin’s boyfriend’s vodka-themed party in an “I didn’t even know this existed” corner of the city at 4 a.m., it probably felt magical. But when you’re in your 30s, a poorly planned night can leave you feeling frazzled over the details of who, what, where, when and “why the hell why?”

As Time reported in 2011, planning your day (or in this case — night) instead of just "letting things happen" can seriously improve your stress levels, thus leaving you feeling more chipper. By creating a schedule for the night’s events ahead of time, you can prevent the stress and fatigue that comes from dreading what converted warehouse or club with a four-block wait line you’re going to be dragged to next. Although blocking out specific places and activities on an Excel sheet timetable may be, umm, excessive — do consider confirming the plan of events for the nights with friends first. (Side note: This is also a good safety tip as someone will know where you are at all times.)

We’re guessing that — if you’re anything like us — you learned the lesson about not drinking on an empty stomach the hard way many a year ago. But it’s not only about making sure you have just anything in your your gut before you wreck it. It’s best to pregame with healthy, wholesome foods if you’re looking to drink more, stay awake longer and ward off a mind-stabbing hangover the next morning.

On top of "healthy and wholesome," scan the grocery aisles for foods high in carbohydrates, protein and healthy fats, which — as reported by Thrillist — help slow your body's process of absorbing alcohol. For starters, try spaghetti (yes, it’s not just for those responsible people running a 10k in the morning; the carbohydrates present in pasta will help your stomach stay full longer), or quinoa (that’s right, you thirtysomething hipsters, quinoa is so high in fiber that it slows the stomach’s emptying time, thus ensuring that the effects of alcohol aren’t like, “Surprise!”) or chicken (it’s lean but still high in protein, which — like carbohydrates — takes longer to digest. Want to get your protein and carbs at the same time? You know what to do: CHICKEN SANDWICH.)

The rager begins. Hopefully you’re well rested and ready to go to the wee hours of Saturday morning. Godspeed!