It's been 8 months and Trevor Noah's 'Daily Show' still sucks 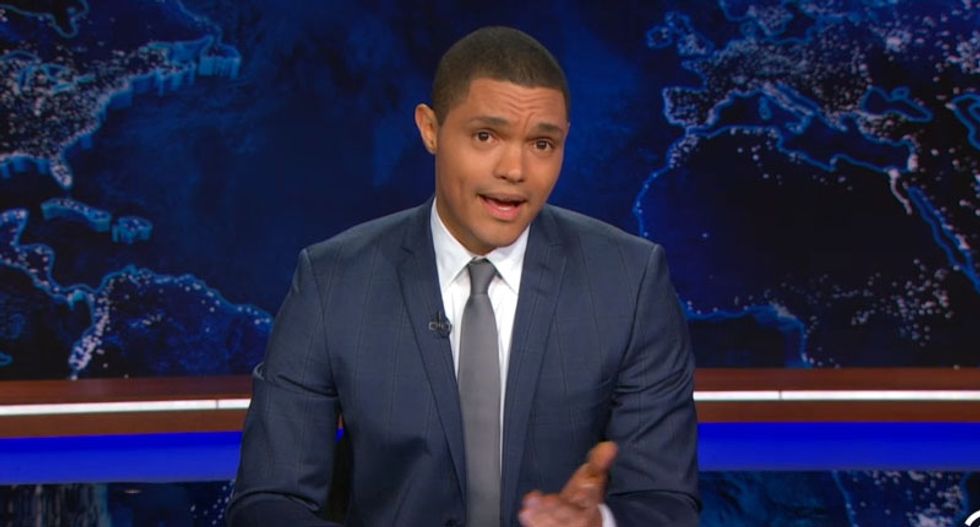 Just a few months after Trevor Noah took over the "Daily Show," it didn't take long to see what was wrong with Noah's interpretation of the show. I took down the fact that Noah can't seem to master the fine art of slapstick, physical comedy, clever silliness in addition to refusing to hold Fox News accountable for what Stewart called "their bullsh*t."

"Comedic timing should feel as natural as slipping down a slide," I criticized. "Right now his jokes are plopping down the stairs like a piece of pizza being dragged by a rat."

Each morning while you're hopefully still asleep, I go through all of the shows and search for something funny to bring you. This is my job before I dive into the news of the day. Raw readers tend to appreciate former correspondents Stephen Colbert, John Oliver, Samantha Bee and sometimes Larry Wilmore when he gets fired up. Noah simply falls flat. I can try to frame one of his segments in the best possible light, but it doesn't matter. Y'all don't click.

While the "Daily Show" made some changes after the holidays, namely getting Noah out from behind the desk to do a stand-up-style opening, the show is still missing .... something. It's as if the nature of the "Daily Show" itself has changed. Like what happened when they came in and swapped out Darrin on "Bewitched" but pretended nothing happened.

Except, Comedy Central didn't just swap out Darrin, they switched "Bewitched" to "I Dream of Jeannie" and hoped we'd see it's all the same. It's like they're making a completely different show and the "Daily Show" is no longer the "Daily Show." For those who miss the spirit of the tone and rhythm that captures the energy Stewart once brought, it's readily available on TBS with Bee and HBO with John Oliver. But the "Daily Show" we've come to know and love ended with Stewart and there's no amount of pounding on its chest that'll bring it back.

Oliver carries the water for broader looks into intense subjects that people have no idea exist. Bee has taken on the role of mocking Republican hypocrisy. Wilmore created a niche for himself calling out racism while also shouldering the load of holding Fox News accountable. What's left? The "Daily Show" is what's left over. There's no focus or goal much less an agenda to "fight bullsh*t." Too often they're late to comment on a story or Wilmore will cover the exact same thing and do it better.

Ratings haven't improved either. According to Nielsen, the audience has dropped by 37 percent in Stewart's absence.  Noah's highest rated show was his first one on September 28th with 0.41 rating in the key 18-49 demographic and just over 1 million viewers. That same week the previous year, Stewart scored a 0.65 and 1.5 million viewers. Eight months later, those numbers are even worse. A few shows have dropped as low as 0.18 and the average gets 0.32 rating among adults 18 -49 and roughly 820,000 viewers. That's roughly the size of Djibouti. The "Daily Show" lost Djibouti.

It isn't a crisis for the network, but in a presidential election year with Donald Trump running, the numbers should be better. During the last election between Republican Mitt Romney and President Barack Obama, Stewart's nightly audience averaged 1.7 million views for the 2011-2012 season.

As the person who writes these stories at four and five a.m. I can't tell you enough how much I appreciated the way Stewart would actually feed us the headline. It was as if he knew and understood the way the media works and would say the perfect soundbite to pitch us on posting that video. It's like wrapping up the segment in a perfect bow and presenting it to the public. No late-night host other than Stewart has ever done that consistently.

I begin each morning hoping that they'll make me laugh or they'll do an epic smackdown that is important to add to the pool of political commentary, but too often I'm left begging my editor to see how it could be funny, not how it actually is funny. With Oliver on Sunday and Bee on Monday, "Daily Show" loyalists are left with three days of unfulfilled political snark.

It's unclear if "Daily Show" producers can turn the boat around. But if it's sinking, would it matter if they did?