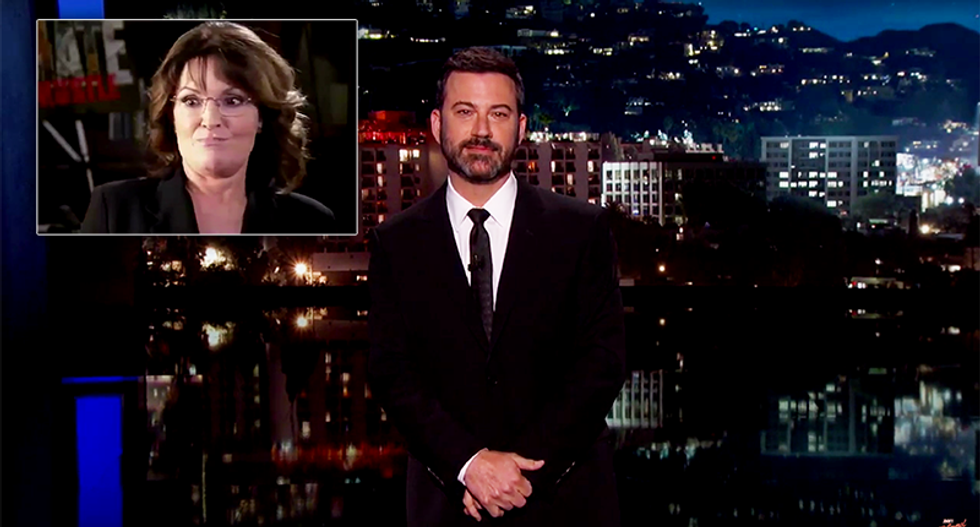 Sarah Palin has a new gig promoting a new climate-denial film called Climate Hustle. This is a perfect project for the former half-term governor of Alaska and failed vice-presidential candidate, because it combines her expertise in absolutely nothing with losing jobs. This was simply too much for late-night host Jimmy Kimmel to handle, crushing her so perfectly it's impossible to think she could ever respond.

Kimmel ran two clips of incoherent Palin ramblings using the "think of the children" angle about science she isn't educated enough to understand. The problem is that her word-salad perpetuates the questioning of something 97 percent of all scientists believe. If she, and other dangerous climate deniers, continue to ramble on the proverbial street corner with a sign, it generates more and more doubt and we destroy the Earth.

“I have a theory,” Kimmel proposed. “I think maybe Sarah Palin wants global warming. It’s cold in Alaska. It would be welcome up there. But, the idea that she knows more than 97 percent of scientists is offensive and dangerous. No matter what Sarah Palin and these geniuses she surrounds herself with try to tell you, climate change is not a liberal-versus-conservative thing.”

“We’ve had 15 of the 16 hottest years ever since 2001. That’s not an opinion. It’s a fact,” Kimmel continued as the audience applauded. “For some reason whether or not humans are contributing to this has become a left versus right issue. The politicians debate it. Our scientists don’t. A huge majority of climate scientists say climate change is happening. They say we’re causing it and we need to do something about it before it has a terrible effect on all of us. There’s no debate about the greenhouse effect, just like there’s no debate about gravity. It someone throws a piano off the roof, I don’t care what Sarah Palin tells you — get out of the way. It’s coming down on your head.”

Kimmel continued, blaming Republicans in Congress for standing with Sarah Palin by perpetuating the idea that climate change is a “left-wing conspiracy.” Republicans “apparently know more about science than our scientists, or they pretend to because they get money to make sure they can keep doing the destructive things that they do."

“Either you believe in science or you don’t,” Kimmel concluded. He also said that he expects to hear from the right for his defense of logic on the show. So, instead of passing himself off as some sort of scientific expert, he brought on actual scientists. One after the other, the experts, not Palin-experts, but actual experts, promised that they are not “f*cking with you” when it comes to catastrophic climate change.