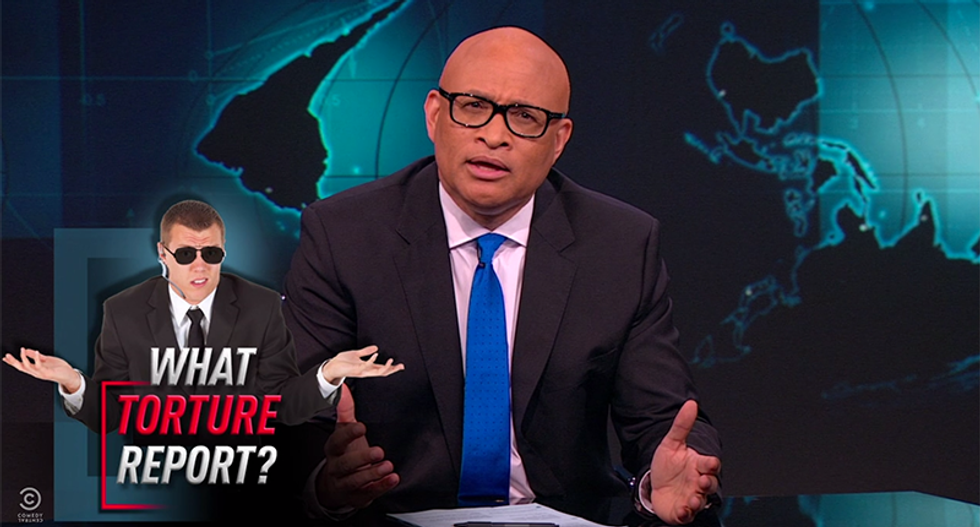 Someone forgot what the "I" in CIA stands for, because this week the agency announced that it accidentally destroyed the 6,700-page report the U.S. Senate Intelligence Committee compiled after George W. Bush's administration was caught authorizing "enhanced interrogation" techniques on suspected terrorists.

"Nightly Show" host Larry Wilmore couldn't hold back on Tuesday. "They destroyed their only copy? This country only has one copy of the 'Torture Report?' how could this even happen? We have two Michael Jordans, you guys," he said, before mocking how the CIA could accidentally destroy the extensive document.

It isn't as if anyone was going to come looking for it or demand some kind of oversight. "This is America. Nobody is going to read a 6,700-page document. We can't even be bothered to read terms of service before we give away all of our rights and privacy!" Wilmore shouted.

Apparently, the whole thing began when the CIA's own general counsel told the CIA's Inspector General's office that the Justice Department wanted all of the copies of the report to be preserved. So, the CIA looked around and was like, "Oops." In fact, their official CIA response was literally, "Sh*t, we don't have one."

The process for receiving classified information is that the CIA takes a disk that contains the documents, uploads them to the classified server and then destroys the disk. Someone read the orders of the Justice Department and interpreted them to mean that the document should be deleted from all servers. Because "preserve all copies" means "sh*t, we gotta delete this thing!" Now, both the original and the copy have been deleted.

"This sounds so incompetent I believe it," Wilmore said. Feasibly, the CIA could come up with a better cover if it wasn't. However, Wilmore also said, "F*ck you, this is bullsh*t. I don't believe you, motherf*cker! You're the CIA! You, by definition, are never supposed to tell me the truth! I just wish you would lie better."

Check out the video below, but you have to go past the report on the penis transplant to 3:20: