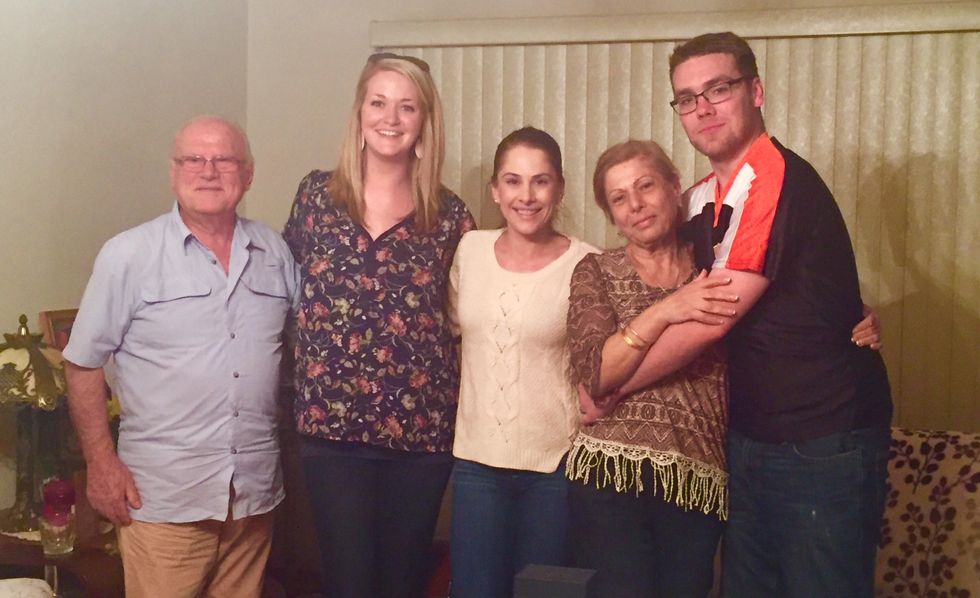 A photo of my family after my mom had a successful kidney transplant.

The first time I realized I came from a working class immigrant family was when I was six. I had gone shopping with my mom and aunt when we decided to pop into an open house for a property we could never afford. The moment I laid eyes on that big blue two-story home something in me changed. It became one of many defining moments of my life, and from then on I became obsessed with the traditional version of the American Dream.

"If you work hard and get a good education you'll have anything you could ever want," I remember my mom telling me.

I asked her if I could one day have a home with stairs (when I was a kid I thought any house with stairs was a mansion). "Yes, you can have any house you want. You just have to work hard," my mom answered back.

Nearly 24 years later, I'm nowhere near owning a big beautiful home, and I've been bitter about it because I've done everything "right." I finished two years of community college while I was in high school so I could start at a university as a sophomore to graduate early. I did graduate early, and even received my Master's degree in political science before I turned 22.

Before I finished my undergraduate degree I found TYT and dedicated myself to helping it grow into a digital news empire. I've done a great deal of work on the side, including teaching journalism at California State University Northridge. I've never relied on one job and usually have a few different gigs going.

Recently I realized that my pursuit for all the material possessions that symbolize success to the average American was literally killing me. The stress I've experienced this year in an effort to become more successful has taken a toll on every component of my life, and has even poisoned who I fundamentally am as a person.

So far 2016 has been full of somewhat impressive career accomplishments. I've been named in the Forbes 30 Under 30 media list, and I've published two opinion pieces for the New York Times. I somehow managed to do my first Ted Talk in between my mom's successful kidney transplant, non-stop election coverage, and planning a wedding. I'm even about to host a new television show with Fusion in addition to producing and hosting the largest online news show in the world. It's been an incredible year for my career, but a disastrous one for my health and overall well being.

While my life might look exciting and glamorous to the outside world, the truth is that I'm suffering from severe depression that I hadn't been honest with myself about until very recently. During a more recent meltdown, my mom confronted me about my own mental health and recommended that I see a doctor for anti-depressants, which I still refuse to take. I know the source of my problems, and I'd rather fix that before I medicate myself. The anxiety attacks have been crippling, and when I woke up sick with a stress-related rash on my arm and face I knew something needed to change.

I haven't been happy or satisfied despite the accolades and accomplishments, and there have been diminishing returns with each new successful project I'm involved in. Hopefully it's clear that I don't hate what I do for work. On the contrary I love it more than words can describe. But I've abandoned balance and I've turned my back on the non-career components of my life that make me happy.

I've obsessed over the fact that I don't own a home, or have the same economic stability that the generation before me had by the time they were my age. I've lashed out at my fiancé when he tried to console me or tell me how proud he is. I usually respond back by telling him that I'm really a failure because I still don't have this or that.

I just realized that all of this was happening because I hadn't learned the most important part of being an adult - saying no to work and recognizing the countless good things I have in my life that have nothing to do with owning a home or becoming wealthy.

I used to believe that you have to say yes to every opportunity that comes your way in order to succeed in life. Now I realize that the rarely-talked-about secret to success (and sanity) is recognizing when it makes more sense to say no.

It's also okay to recognize that my generation is living in different times with unique obstacles to attaining a financial piece of mind. Is a huge home and nice car worth losing sight of things like family, love and health? You know, the things that really matter?

Not by a long shot. So work hard, and keep dreaming big. Just don't neglect all the incredible things that make you happy now.