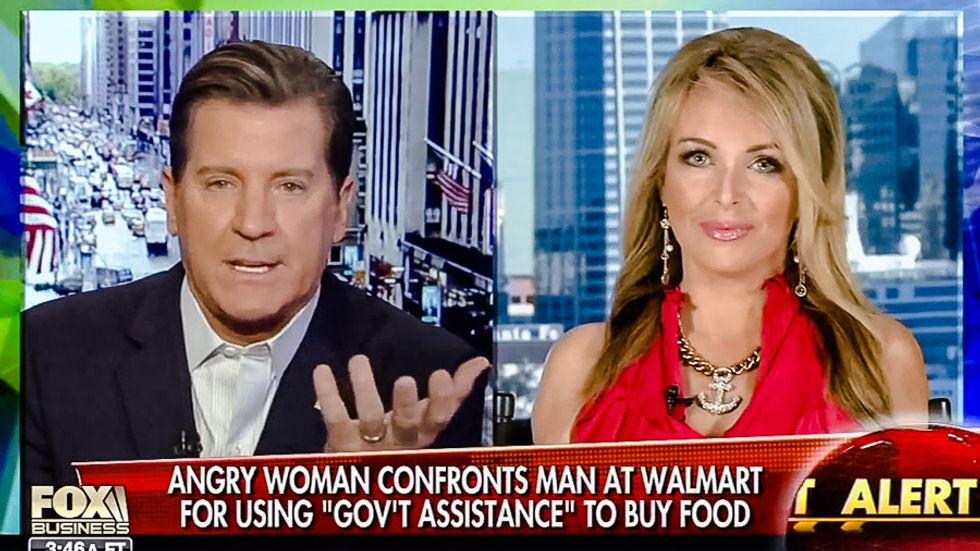 During a panel discussion over the weekend, Fox News pundits suggested that a father was a "looter" for using a government program to help feed his family.

In a recent viral video, a woman shopping at Walmart can be seen berating a man who was using the Supplemental Nutrition Assistance Program (SNAP) -- commonly known as food stamps -- at the checkout.

“You’re not providing for it, I am,” the woman shopper said. “The government is. They take it out of my check, bullsh*t they don’t.”

"I am not a bleeding heart f*cking liberal," the woman quips, adding that the man must be a "Bernie supporter."

Over the weekend, Fox News host Eric Bolling wondered if the father using food stamps was "why voters are so angry in 2016."

"I'm proud of this woman," hedge fund manager Jonathan Hoenig insisted. "This is the producers and the looters. And you know what, she's absolutely right. You have every right to keep every cent of your money."

"You know, I hate having my wealth redistributed for special political favors," he continued. "Is Trump going to be against these types of issues? I hope so."

Fox's Juan Williams pointed out that the SNAP program was essential for feeding hungry families.

"A child in America, we don't want them starving!" Williams said.

"This is the kind of program that is outside the purview and the scope that government was ever intended to be," she opined. "This guy should be getting help from a church or a charity or his family or his friends or his neighbors, not from government."

"Because government then uses those handouts to enslave people."