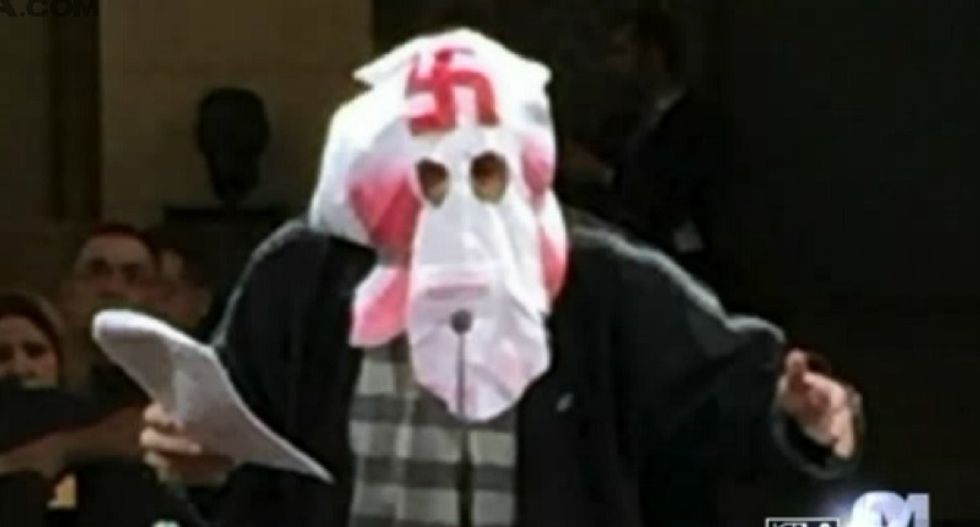 An attorney from the San Fernando Valley neighborhood of Encino submitted a speaker card on Wednesday night directed at Council president Herb Wesson, who is African-American, covered with racist language and imagery.

Police arrested Wayne Spindler for a felony count of making criminal threats and using hate speech. The 46-year-old is free after posting $75,000 bail and set to appear in court on June 10.

Spindler is no stranger to L.A. City Hall, and Wesson told reporters he no longer feels safe while on the premises, telling KTLA he has become so concerned that he and his staff don't walk through City Hall alone.

On the speaker card, Spindler calls himself "Wayne from Encino." In what appears to be bright blue marker, he drew a burning cross, a man hanging from a tree and a crude picture of a KKK member holding a noose and a sign that reads "Herb = N***er." 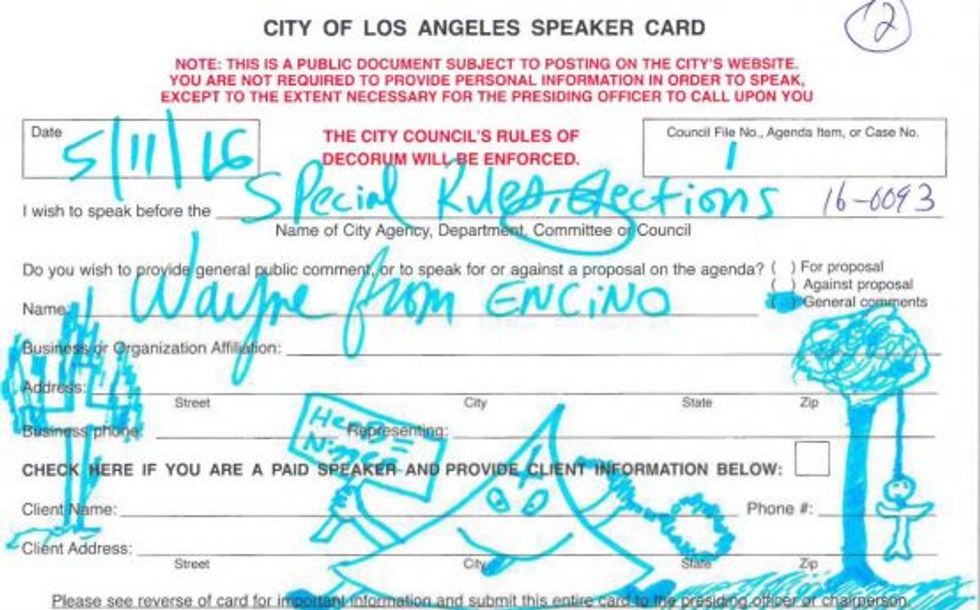 The card was submitted to the May 11 meeting of the Rules, Elections, Intergovernmental Relations and Neighborhoods Committee, of which Wesson is chair. Wesson is also the first African-American City Council president.

The California State Bar lists Spindler as a currently-licensed attorney with no record of professional discipline.

“Criticism comes with the job and I can usually blow it off as part of the job,” Wesson told the Los Angeles Sentinel. “But the often harassing and threatening comments made by Mr. Spindler have become increasingly worse over time. It has risen to the point that I have serious concerns about my safety, my family’s safety, my staff’s safety and the safety of my colleagues on the city council.”

The Sentinel reports Spindler has directed racist attacks at other black City Council members, and uses swear words during his public comments.

“When there are kids attending the Council meeting, he will use the F word every-other-word. He gets some sick joy out of traumatizing kids," Councilwoman Nury Martinez told the Sentinel. "On a day when the Council recognized Denim Day to fight rape, Mr. Spindler made disgusting and sexist language that promotes rape culture. When Mr. Spindler calls me and other women ‘cunt’ or ‘bitch,’ he is not advancing constructive dialogue. He is abusive and sexist. His only goal seems to be to disrupt meetings and offend everyone in the room.”

Watch the report, from KTLA, here: