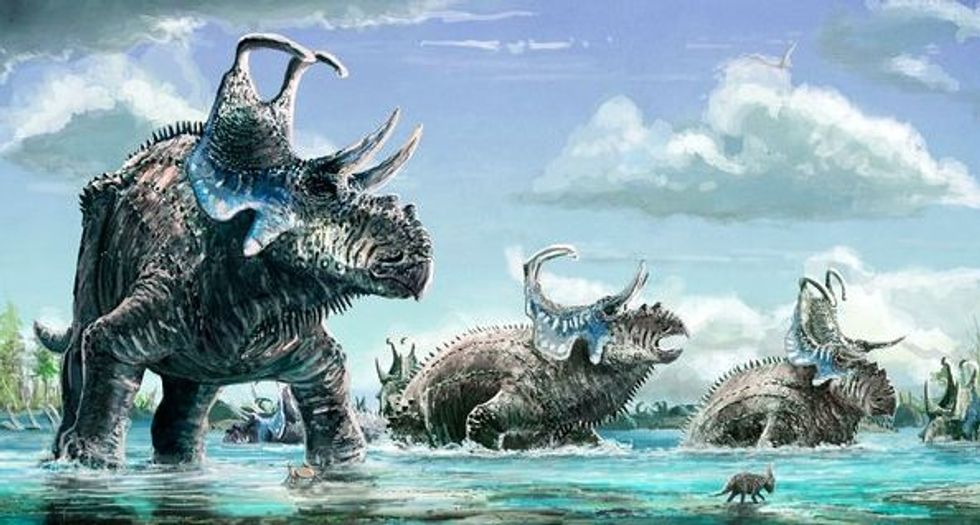 Machairoceratops is shown in this artist depiction courtesy of Pat O'Connor. Pat O'Connor/Courtesy of Ohio University/Handout via REUTERS

Two newly discovered dinosaurs unearthed in the western U.S. states of Montana and Utah are illustrating the exotic appearance some of these beasts developed, with fanciful horns and spikes, toward the end of their reign on Earth.

Scientists on Wednesday announced the discovery of fossils of two species that provide new insights into an important group of truck-sized, four-legged, plant-munching, horned dinosaurs that roamed the landscape late in the Cretaceous Period.

Both dinosaurs were members of a group called ceratopsians that included the well-known Triceratops, typically possessing parrot-like beaks to crop low-growing herbs and shrubs, a bony neck shield, or frill, and forward-pointing facial horns.

Fossils of Machairoceratops cronusi, which lived about 77 million years ago, were found in Utah's Grand Staircase-Escalante National Monument.

Machairoceratops, up to 26 feet (8 meters) long, had two large, forward-curving spikes coming out of the back of its shield, each marked by a peculiar groove extending from the base of the spike to the tip, Ohio University paleontologist Eric Lund said. Machairoceratops also had two horns over its eyes and probably one over its nose, although the incomplete fossils did not show that.

Fossils of Spiclypeus shipporum, which lived about 76 million years ago, were discovered near the town of Winifred, Montana.

Spiclypeus, about 15 feet (4.5 meters) long, boasted brow horns sticking out sideways rather than pointing forward, paleontologist Jordan Mallon of the Canadian Museum of Nature in Ottawa said. It had spikes at the back of its frill that pointed in different directions: some curling forward and others projecting outward, Mallon said.

"We think the horns and frills were probably used for display of some sort, either for sexual or species recognition," Mallon said.

This Spiclypeus individual was dubbed "Judith" because the fossils came from the Judith River rock formation. Judith apparently lived a painful life. The upper bone in its left front leg bore signs of disease: arthritis near the shoulder joint and a hole near the elbow caused by a bone infection.

"I think Spiclypeus wins top prize for being the most aesthetically pleasing horned dinosaur, but that's my bias talking," Mallon said.

"I think a visitor to the Late Cretaceous would have been immediately intimidated by standing in the shadow of Judith's spiky skull, but then overcome with sympathy after noting the animal ambling about painfully on only three legs."

The research was published in the journal PLOS ONE.