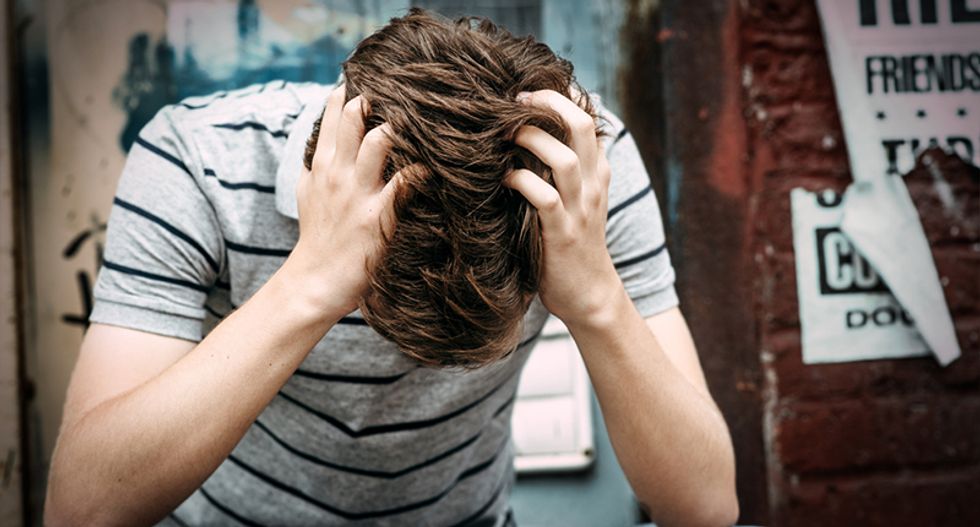 Alex Jacobsen, 26, was suffering from mental exhaustion and anxiety. He hadn't slept for days despite being in a faith-based treatment program. He felt hopeless and when he spotted a box knife he grabbed it and held it against his neck pressing harder as it cut through his skin.

This all happened 10 days after he stopped taking his medication, which was when he entered himself into the faith-based program, the Des Moines Register reports. He said he trusted his recovery to them and to God and he almost died from it.

The free discipleship program he checked himself into is run by two Assembly of God pastors who hope to heal their patients of addiction, anxiety, anger, depression and "the emotional residue left by mental, physical and sexual abuse” by using prayer, Scripture memorization and developing a closer relationship with God, according to program's promotional materials. The only requirement of the patients is that you can't use any mood altering drugs, prescribed or not. Assembly of God churches hold as a cardinal doctrine that the Divine will heal the sick, though they do allow medical help and using prescription drugs if necessary.

The program replaced his mood stabilizers with a dose of Bible study, amino acids and GABA supplements which they told him would reduce stress. Rev. Kevin Grimes, told him “medicine alone wasn’t going to be the answer to my problems,” just a year before that. Grimes isn't a doctor nor has he ever received any training in pharmaceuticals or medicine.

“In my mind, Alex’s anxiety was environmental,” the pastor said. “I knew he was stressed out. But I also knew he was taking all kinds of meds.”

So, Grimes checked Jacobsen into a faith-based treatment program called Teen Challenge in 2014, but Jacobsen was out of place among people who were meth and heroin addicts.

“Kevin, do I need to be addicted to meth for 18 years for God to help me?” he remembers asking Grimes.

Rev. Nick Hanges, a former addict and graduate of Teen Challenge, moved to Grimes' church and started his own program designed from the program he'd participated in, the Dream Center. After the holidays, Jacobsen told his family he was checking himself into the program, but his father had concerns.

Jacobsen's father said that he called Rev. Hanges to ask if his son could put a hold on starting the program so he could go to his scheduled evaluation for outpatient treatment at University of Iowa Hospitals. He also said he warned Rev. Hanges about the prescription drugs his son was taking and inquired about the pastor's training. The pastor assured the father that his mentally ill son could make his own choices and would make the right decision. He also clarified that he is certified online as a faith-based Christian counselor by the International Institute of Faith-Based Counseling in Texas.

Jacobsen was nervous in the days leading up to starting the program. He texted Rev. Hanges several times fearful of his ability to get off his prescription drugs.

“Don’t back out of this again, man,” Hanges messaged back. “You won’t have that much alone time, trust me. This is what you need to do and you know that. I will help you get off the medications.”

The contract Jacobsen signed the day he checked into the program requires all participants to swear and affirm they have no medical condition that prevents them from participating. It also said that by signing the agreement Jacobsen released the Dream Center of “any liability whatsoever arising as a result of death, injury or illness.”

Just a few days later, Jacobsen said that he told Rev. Hanges he "wasn't feeling right and was suicidal." Hanges told him that the feelings would pass.

Today Jacobsen blames himself. “Maybe I didn’t explain it to him well enough,” he said. “Maybe now Grimes will see faith doesn’t heal everything,” he scratched on a piece of paper to his mother while sitting in the hospital.

Medical professionals who treated him after the suicide attempt told the family that he could have died from suddenly halting the use of his medication. The Society for the Study of Addiction lists insomnia, anxiety, fatigue, psychosis and suicidal thoughts as symptoms of withdrawal. All of which Jacobsen had.

Jacobsen's father blames Revs. Grimes and Hanges for everything that happened and wants to know how a program can operate without any clinical experts on staff. Clinics like these also manage to skirt Iowa state laws that mandate a license to operate.

Grimes admits he and the program obviously didn't understand the extent of Jacobsen's issues and they have since changed the program's rules. He doesn't speak to Jacobsen or his family anymore.

“They do not have the medical or psychological training to do what they’re doing,” Jacobsen's father said. “If the state doesn’t require some sort of oversight, this will happen to other families.”