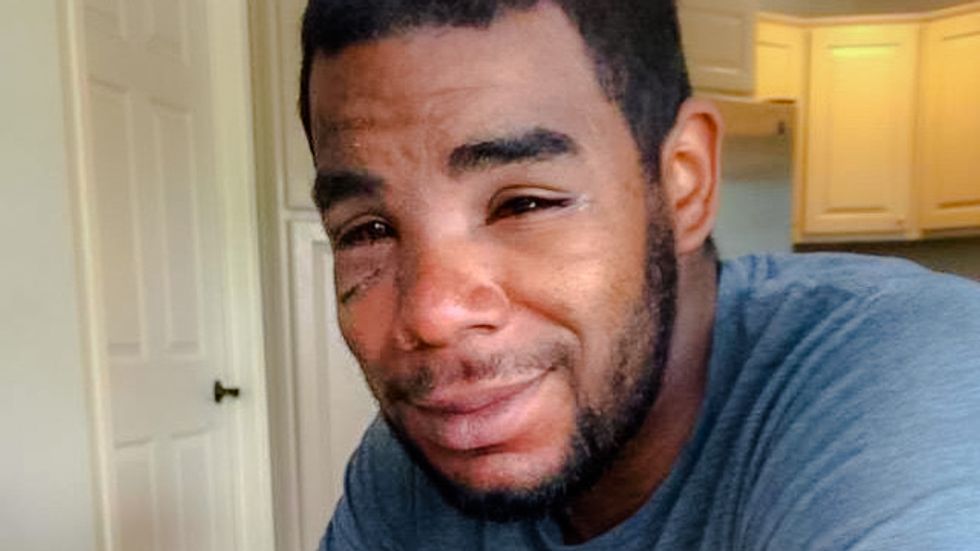 According to The Sheridan Press, the incident occurred on a recent Saturday night when Clayton Denny stopped at the Beaver Creek Saloon for a beer after taking an evening bike ride to shoot photographs.

Denny, who is African-American and Chippewa Cree, told the Billings Gazette that he got in an argument with 26-year-old Jacob Olson and 21-year-old Dylan Dygert over a racial remark.

After a bartender ordered the men to take the argument outside, Denny said that he tried to walk away from Olson and Dygert. And the next thing he remembered was lying flat on his back, hearing racial epithets and being punched and kicked by the two men.

"A push, white flash, bits and pieces of pain," he recalled.

Doctors later informed Denny that he had a fractured orbital bone. Fluid needed to be drained from his face, and he required staples in multiple places on his head.

"The surgery today was to clean out the infection in the cut under his right eye," Annie Shaver, Denny's girlfriend, explained to the Billings Gazette on Monday.

Olson and Dygert argued that they were defending themselves even after being confronted with security camera footage of the incident. They were both charged with aggravated assault and battery.

According to court documents, a witness overheard Olson telling someone on the phone that he had hurt someone, and that "the person might be dead." The documents stated that Dygert had a swollen hand and blood on his shoes, which he had apparently tried to wash off.

Although the Sheridan Police Department declined to charge the suspects with hate crimes, the final decision will be left up to the County Attorney’s Office.

Olson and Dygert were both being held in lieu of $20,000 bond. They both face up to 10 years in prison if convicted.