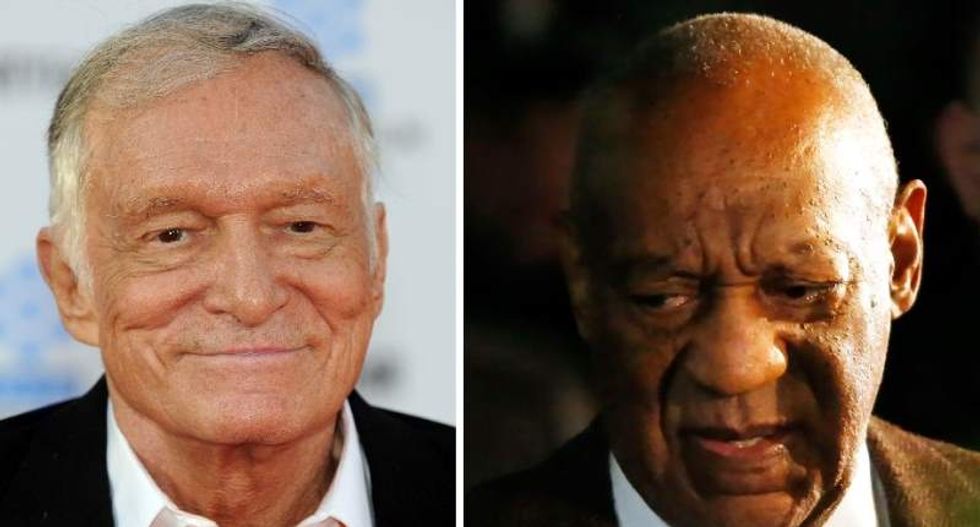 A model has named Playboy founder Hugh Hefner in a new lawsuit against Bill Cosby in which she alleges the disgraced comedian drugged and sexually abused her at the Playboy mansion.

Chloe Goins claims in her civil suit -- the details of which were contained in another criminal complaint that was dropped -- that she had tagged along with a friend to the famous Beverly Hills mansion in 2008, when she was 18, and was sexually assaulted by the embattled comedian after he gave her a drink.

According to the suit, Goins began to feel ill after ingesting part of the drink and was told by Hefner to go and "lie down" in a bedroom at his residence.

She alleges that Cosby escorted her to a private room and she blacked out, waking up some time later to find Cosby naked and sucking her toes.

Goins alleges in her suit that Hefner introduced her to Cosby at the party, knowing full well at the time of the comedian's habit "of intoxicating young women and spending the night with them while at his residence."

The lawsuit says that by inviting underage women to his home, providing them with alcohol and introducing them to Cosby, Hefner had encouraged and aided Cosby's acts.

"Defendant Hefner knew or should have known that defendant Cosby over the years had a propensity for intoxicating and or drugging young women and taking advantage of them sexually and against their will or while they were unconscious," the suit alleges.

The Playboy mogul could not be reached for comment on Tuesday.

Goins's allegations were raised earlier in a criminal complaint that the Los Angeles District Attorney's office declined to prosecute, citing lack of evidence.

Nearly 60 women have accused Cosby of sexual assault and the 78-year-old megastar-turned-pariah is facing a number of lawsuits from his alleged victims.

He faces a preliminary hearing later this month in Pennsylvania stemming from criminal charges in a case brought against him by Andrea Constand, a former employee of Temple University's basketball team.

Constand says the entertainer forced himself on her at his suburban Philadelphia home in 2004.