Noam Chomsky: Today's GOP is 'the most dangerous' threat to the species 'in human history' 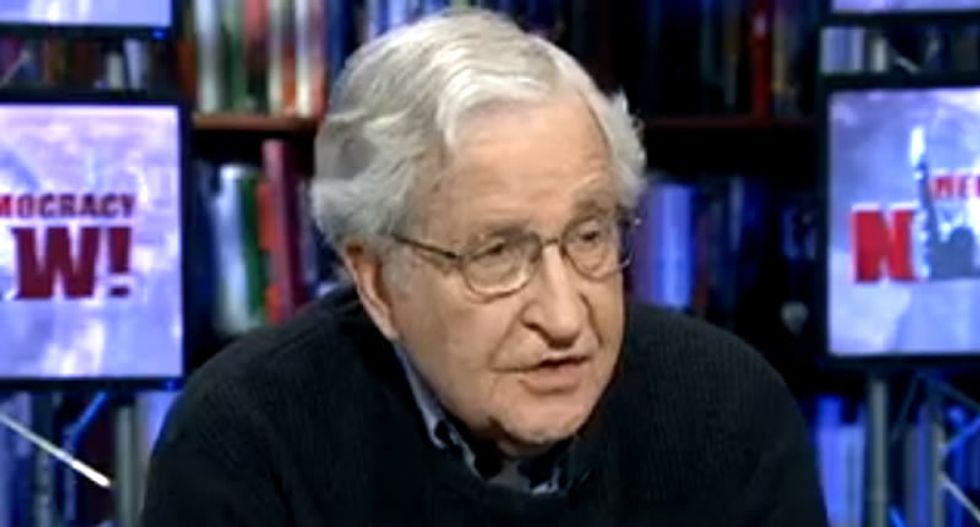 Acclaimed political theorist Noam Chomsky warned this week that today's Republican Party could literally be "the most dangerous organization in human history."

During an interview on Monday, DemocracyNow's Amy Goodman asked the renowned dissident to explain the rise of Donald Trump within the Republican Party.

Chomsky pointed out that the phenomenon was an "extreme version of something that’s been going on just for years in the Republican primaries."

"Every time a candidate came up from the base—Bachmann, McCain, Santorum, Huckabee, one crazier than the other—every time one rose from the base, the Republican establishment sought to beat them down and get their own—get their own man—you know, Romney," he explained. "And they succeeded, until this year. This year the same thing happened, and they didn’t succeed. The pressure from the base was too great for them to beat it back."

According to Chomsky, the roots of extremism in the current Republican Party went back Ronald Reagan's administration.

"[T]he fact of the matter is that today’s Republican Party qualify as candidates for the most dangerous organization in human history," the former MIT professor added. "Just take their position on the two major issues that face us: climate change, nuclear war. On climate change, it’s not even debatable. They’re saying, 'Let’s race to the precipice. Let’s make sure that our grandchildren have the worst possible life.'"

Chomsky noted that members of the GOP had also been calling for 'increased militarization' on the issue of nuclear war.

"There’s been nothing this—literally, this dangerous, if you think about it, to the species, really, ever. We should face that," he concluded.

Chomsky's remarks about the Republican Party begin at the 17 minute mark in the video below.