NRA lobbyist: Hillary is already shopping for 'His and Hers twin beds in the White House' 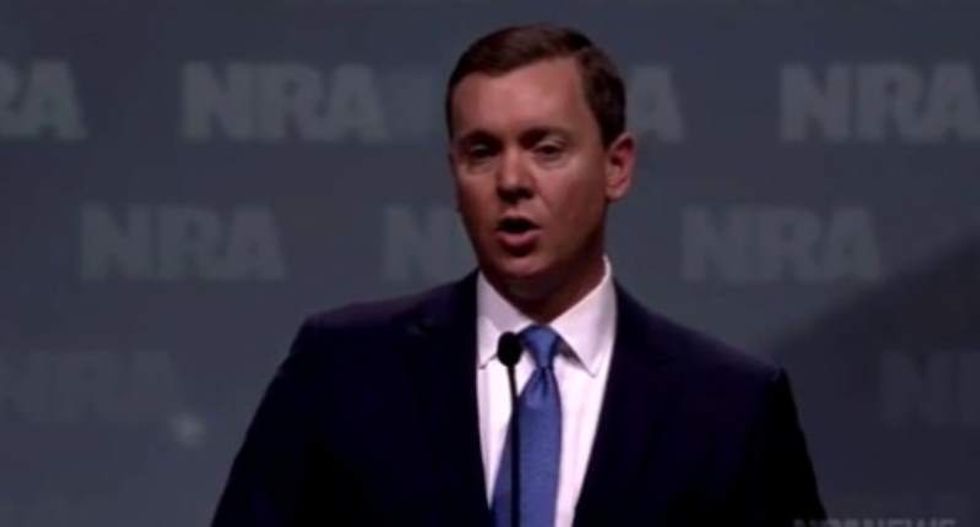 The National Rifle Association's (NRA) top lobbyist misrepresented Hillary Clinton's remarks regarding the Second Amendment and made a lewd joke about her marriage during a speech at the group's annual meeting, Mediaite reported.

"Friends, let me say this: Hillary Clinton has a legitimate chance to be the next president, as long as people like us stay home. Sit on the sidelines," Chris Cox said during remarks prior to Donald Trump's heavily-publicized appearance. "You know what? We're giving her reason for optimism these days. She looks at all the discord and division and starts shopping online for 'His and Hers' twin beds for the White House."

Cox, who leads the NRA's Institute for Legislative Action -- its lobbying arm -- then apologized to his mother, who he said was in the audience.

He also played an audio clip from an October 2015 speech to illustrate what he called Clinton's stance on the Second Amendment, preceding it with doctored footage of her "barking."

The clip was accompanied by a visual display highlighting the remark, "the Supreme Court is wrong on the Second Amendment," which Cox interpreted as the former Secretary of State attacking peoples' rights to defend themselves against armed intruders.

"She wants us to live in a place where only law enforcement has guns, and everything is free: free meals, free healthcare, free education," he said. "Well Hillary, that place does exist and you just might get to live there -- it's called prison."

But Mediaite noted that Clinton's full remarks concerned what she called NRA intimidation of elected officials to push through "absurd laws."

"The idea that you can have an open carry permit with an AK-47 over your shoulder walking up and down the aisles of a supermarket is just despicable," she said. "So I'm gonna speak out, I'm gonna do everything I can to rally people against this pernicious, corrupting influence of the NRA. I was proud that my husband took them on, and we were able to ban assault weapons but he had to put a sunset on it so 10 years later, of course, [George W.] wouldn't agree to reinstate them. We've got to go after them. Here again, the Supreme Court is wrong on the Second Amendment, and I am gonna make that case every chance I get."

Watch footage from Cox's speech, as posted online, below.