Obama tries to reassure Asians terrified by Trump: 'Things are going to be okay -- I promise' 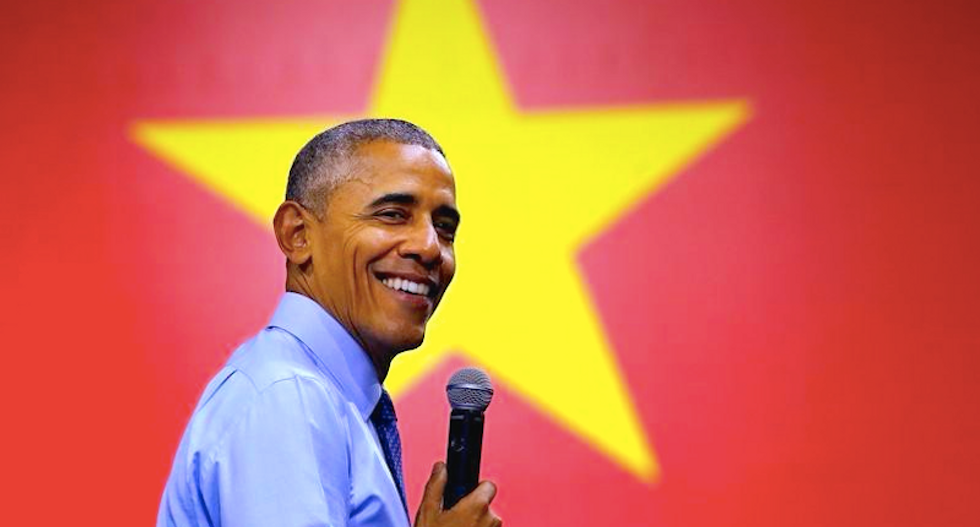 U.S. President Barack Obama sought on Wednesday to ease growing Asian worries about the raucous election campaign to succeed him which has been dominated by the incendiary rhetoric of mogul Donald Trump, now the Republican Party's nominee.

"I think other people sometimes look at our election system and say, 'What a mess'," Obama told a townhall meeting with young leaders in Vietnam's Ho Chi Minh City, formerly Saigon.

"But usually we end up doing okay because the American people are good people ... Sometimes our politics doesn't express all the goodness of the people," he said, without referring specifically to any of the presidential candidates.

Obama made the comments just before ending a three-day trip to Vietnam, whose high point was an announcement that Washington's ban on sales of lethal weapons to the country - a vestige of the Vietnam War - would be completely lifted.

Obama repeatedly insisted that lifting the embargo was not a response to Beijing's assertiveness in the South China Sea. Critics accused Washington of throwing away a powerful lever it had to press communist-ruled Vietnam for improvements in human rights.

White House officials say the arms move was a natural step to take with a country that, once an enemy, is now a key part of Obama's strategic 'rebalance' towards Asia and an important trade partner as its economy grows apace.

Obama also announced the Peace Corps would begin operating in Vietnam for the first time.

Across Asia, policymakers have been startled by Trump's "isolationist" foreign policy pronouncements, which have challenged much of the status quo in Washington's relations with the region.

Many fear Trump will feed insecurity in nations worried about China's growing power, embolden nationalists and authoritarians, and unravel Obama's 'pivot' to the Asia-Pacific.

At the townhall in Ho Chi Minh City, a young woman who had been an exchange student in Montana asked Obama what he thought of the prospects that Trump or Democratic contenders Hillary Clinton or Bernie Sanders following him to the White House.

"Usually, eventually the voters make good decisions and democracy works," replied Obama, whose criticism of Trump has sharpened since he all but clinched the Republican nomination. "Things are going to be okay. I promise."

Thousands of people lined the streets of Ho Chi Minh City for a second day to cheer enthusiastically and wave mini-flags of Vietnam and the United States as Obama drove by on his way to the airport for a flight to Japan.

At his freewheeling townhall, where he was greeted with a standing ovation, Obama noted that two-thirds of the country's population were born after 1975, when the war ended with North Vietnamese tanks rolling into Saigon to bring U.S.-backed South Vietnam under communist rule.

Obama prodded Vietnam's leaders on political freedoms during his visit after critics of the government were prevented from meeting him. When a woman rapper at the townhall asked him about supporting arts and culture, he segued into an appeal for people to be allowed to express themselves.

However, his unusually long one-country visit was warm and mostly about strengthening diplomatic and economic relations.

Annual U.S.-Vietnam trade has swelled from $450 million when ties were normalized in 1995 to $45 billion last year. Washington is a big buyer of Vietnam's televisions, smartphones, clothing and seafood.

Obama repeatedly touted the benefits of the Trans-Pacific Partnership (TPP) trade pact, of which export-led Vietnam will be one of the biggest beneficiaries, if it survives opponents in Washington concerned about competition and a loss of U.S. jobs.

He also talked about the challenges of climate change when asked about the drying-up of the Mekong River in the rice-bowl delta of southern Vietnam, urging Southeast Asian countries to work together.

The Mekong River, which sustains 60 million livelihoods as it flows through Laos, Thailand, Cambodia and Vietnam, is under threat from at least 39 hydro-electric dams being built or under development upstream of Vietnam, most of them in China.

Obama did not name any of the upstream countries but said the United States would provide smaller member states of the Association of Southeast Asian Nations (ASEAN) with technical assistance and evaluations of what needs to be done.

"Hopefully ... that information can be used to negotiate on an international level to try to prevent some projects that might have very bad effects," he said. "One of the things that we've seen in ASEAN is that when small countries band together as a unit, then the power magnifies."

Japan is the final stop on Obama's swing through Asia, where he is attending a summit of the Group of Seven industrialized nations starting Thursday.