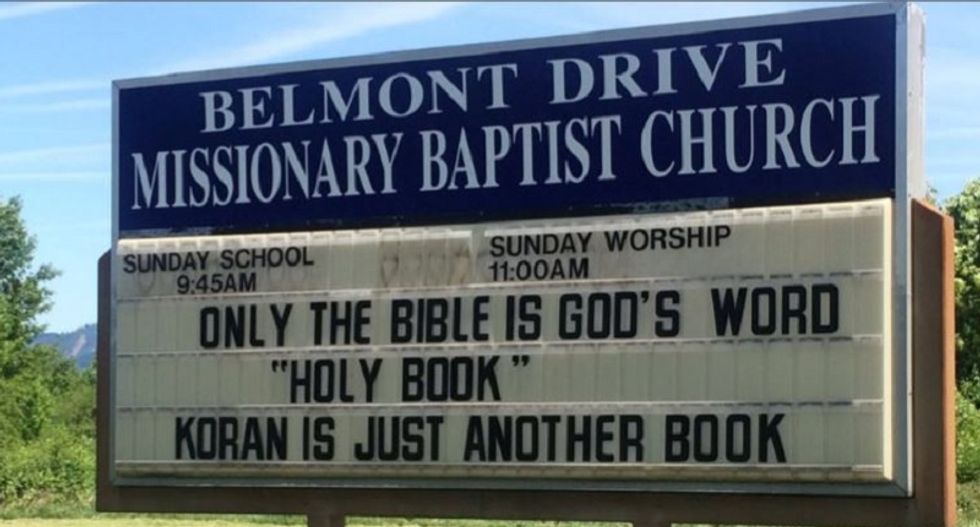 The pastor of an Oregon Baptist church is under fire locally for putting what critics call a bigoted message on his church's sign board, KATU reports.

Pastor Michael Harrington placed the words on the reader board outside Belmont Drive Missionary Baptist Church. On one side it reads, "Wake up Christians, Allah is not our God, Muhammad not greater than Jesus." On the other side, it says, "Only the Bible is God's word, 'holy book,' Koran is just another book."

But locals, including the mayor, don't want to see the signs.

"I was really annoyed and sad," Hood River mayor, Paul Blackburn, told KATU. "I am annoyed that in this political season there's a solid case of ugly going on. I think it norms up this kind of behavior like 'oh it's okay to be a bigot now.'"

Another resident, Eric Cohn, said he was very upset.

"I literally had to stop and back up and make sure I saw what I saw, and I was profoundly offended and upset by it," Cohn told KATU.

Harrington told the station he has no plans to remove the sign until the beginning of June, when he was planning to put a new one up anyway.

Watch the report, from KATU, here: