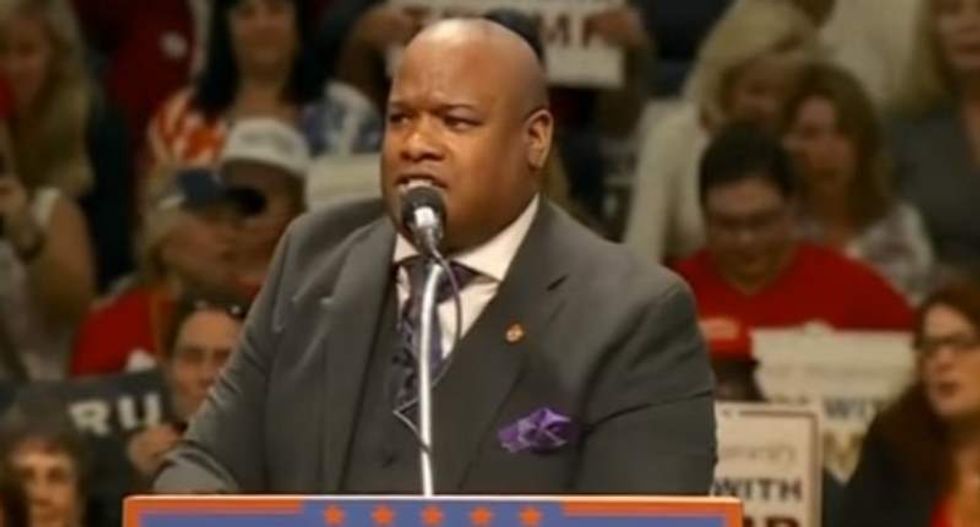 A pastor who has thrown in for Republican candidate Donald Trump compared US business practices to sexual assault during an interview with MSNBC host Kate Snow, Media Matters reported.

Pastor Mark Burns argued that rather than "tap dance for votes," the presumptive GOP nominee will push "to bring jobs back to this country, make it really difficult for companies like Carrier to leave and go to Mexico, but to keep them here in America. You're not going to leave America, take the jobs with you, rape us so to speak and then profit off of the hard working people of this country without having jobs."

"I'm from the South," he said. "My wife and I, we have six beautiful brown babies, six beautiful mixed babies. I know what real racism looks like, and even sounds like. And it's not Donald Trump. Donald Trump is simply stating that he loves that particular group of people. He's talking to the Hispanic people."

However, he dodged the question when Snow asked him to explain the meaning of Trump's campaign slogan.

"What America are you talking about when you say 'Make America Great Again' like it was before. What era are you looking back to?" she asked.

"I'm not gonna -- again, I'm no political pundit," he said. "I'm a pastor whose simple message is bring the love of God to this world, bring this country back to God, bring God back to this country."