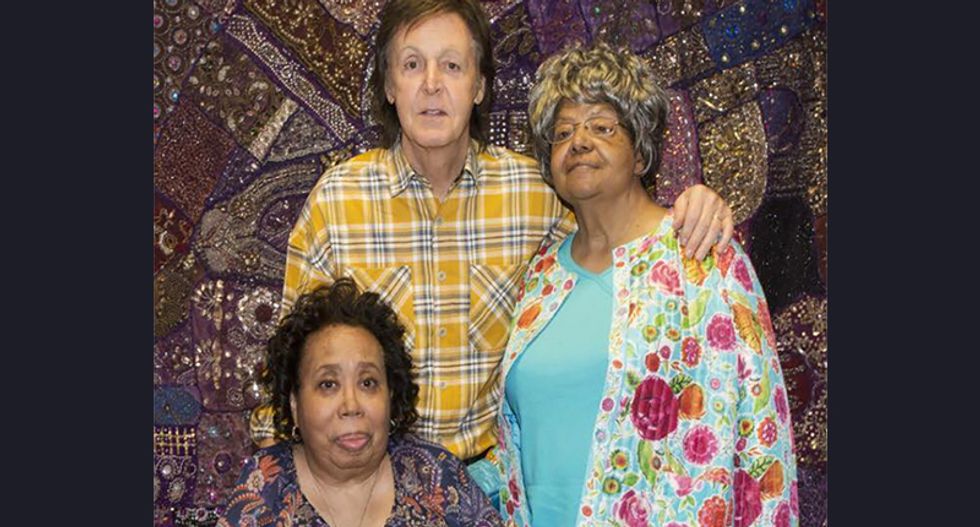 While in Arkansas for a concert, Paul McCartney met with two of the women from the "Little Rock Nine" who inspired the Beatles' song "Blackbird."

According to Arkansas Times Blog, Thelma Mothershed Wair and Elizabeth Eckford stood with McCartney for a photo the Verizon Arena later posted on their Facebook page. They wrote that the "Little Rock Nine" helped introduce McCartney to the Civil Rights battles happening in the United States in the 1960s.

McCartney tweeted about meeting the women as well:

Incredible to meet two of the Little Rock Nine--pioneers of the civil rights movement and inspiration for Blackbird. https://t.co/QrnOQnqrFX
— Paul McCartney (@Paul McCartney) 1462078142.0

The women were part of the black students the National Guard had to help when they attended classes at the all-white Little Rock Central High School in 1957. After the Supreme Court ruled in Brown v. Board of Education, schools were all desegregated, but Arkansas Gov. Orval Faubus was determined to stop it until President Dwight D. Eisenhower called in troops to assist.

"We were totally immersed in the whole saga which was unfolding," Paul McCartney told MoJo Magazine in October 2008. So I got the idea of using a blackbird as a symbol for a black person. It wasn't necessarily a black 'bird,' but it works that way, as much as then you called girls 'birds'; the Everlys had had 'Bird Dog,' so the word 'bird' was around. 'Take these broken wings' was very much in my mind, but it wasn't exactly an ornithological ditty; it was purposely symbolic."

"I had in mind a black woman, rather than a bird," Mccartney told biographer Barry Miles for his book Paul McCartney: Many Years From Now. Those were the days of the civil rights movement, which all of us cared passionately about, so this was really a song from me to a black woman, experiencing these problems in the States: 'Let me encourage you to keep trying, to keep your faith, there is hope.' As is often the case with my things, a veiling took place so, rather than say 'Black woman living in Little Rock' and be very specific, she became a bird, became symbolic, so you could apply it to your particular problem.

McCartney introduced "Blackbird" in the video below taken by Chad Jones, telling the audience, "Way back in the Sixties, there was a lot of trouble going on over civil rights, particularly in Little Rock. We would notice this on the news back in England, so it's a really important place for us, because to me, this is where civil rights started. We would see what was going on and sympathize with the people going through those troubles, and it made me want to write a song that, if it ever got back to the people going through those troubles, it might just help them a little bit, and that's this next one."