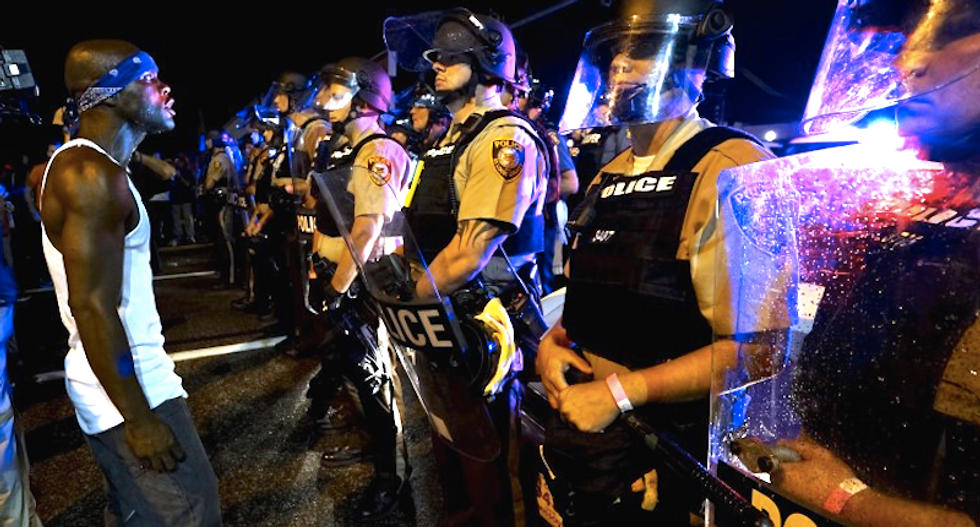 A protester yells at a police line shortly before shots were fired in a police-officer involved shooting in Ferguson, Missouri August 9, 2015. (REUTERS/Rick Wilking)

Police departments across the US would lose public funding if they fail to introduce tighter restrictions on when their officers may shoot at suspects under a new law proposed by a Democratic congresswoman.

A bill due to be introduced in the House of Representatives on Thursday by Gwen Moore of Wisconsin would financially penalize any police chiefs who did not order and train their officers to do everything possible to avoid opening fire during confrontations with suspects.

Announcing her proposal , Moore said that “too many mothers have been forced to bury their children” due to unjustified deadly incidents involving police. “Too many young men and women in this country are unreasonably struck down by the very people who swore an oath to protect them,” she said in a statement.

Moore said in an interview that she had been prompted to act by the findings of a Guardian investigation recording every death caused by police in the US, along with a Washington Post project counting fatal shootings by officers.

The Guardian initiative, titled The Counted, recorded more than 1,100 deaths in 2015 . “It would be different if this were a rare incident,” Moore said. “But when you get into the 1,000 cases plus that you found, it’s the kind of thing that really makes you think.”

Moore’s proposal is unlikely to advance in the Republican-controlled House, which has declined to take up a series of related initiatives from Democrats amid a wave of protests set off by the unrest in Ferguson, Missouri, following the fatal police shooting of an unarmed black 18-year-old in August 2014. She said, however, that she was seeking Republican backers for her bill.

Her plan, titled the Preventing Tragedies Between Police and Communities Act, demands that states and municipalities introduce laws or police department policy manuals that set out an “affirmative duty” for their police officers to employ de-escalation techniques “whenever possible”, and to train them to “use the lowest level of force that is a possible and safe response to an identified threat”.

The bill calls for mandatory training in the use of non-lethal force alternatives along with “verbal and physical tactics to minimize the need for the use of force, with an emphasis on communication, negotiation [and] de-escalation techniques”.

It also requires training in crisis intervention tactics, which are aimed at calming confrontations with people enduring serious mental health problems. Mental health issues were reported in relation to 246 people killed by police in 2015 – more than one in every five cases in the Guardian database.

Surveys by the Police Executive Research Foundation (PERF) have found the average police cadet received 58 hours of training on using guns, 49 hours on defensive tactics, and only eight hours on de-escalation. Moore based her proposal on a report by PERF published earlier this year, which set out a series of “guiding principles on use of force”.

Moore’s bill would not create new federal law on when officers may shoot. Under a pair of landmark US supreme court decisions from the 1980s, police may use deadly force against a suspect they reasonably believe “poses an immediate threat to the safety of the officers or others” or, if the suspect is fleeing, “that the suspect poses a significant threat of death or serious physical injury to the officer or others.”

However, Moore’s office lamented in a briefing document on Thursday that officers are frequently “trained more heavily on what is technically and legally allowed under the law” than in techniques designed to de-escalate confrontations.