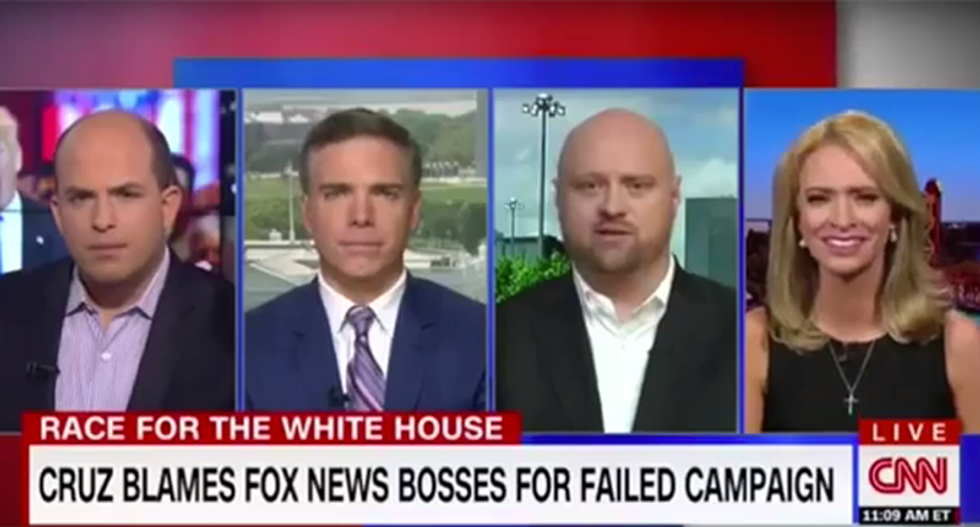 Even with establishment Republicans coming out to save Donald Trump's political bum, RedState's Ben Howe refuses to cave. Sunday's Reliable Sources, on CNN had host Brian Stelter asked Howe if his problem was "the Hillary you know" vs. "the Trump you don't," but a true conservative like Howe wasn't about to let Trump off the hook.

"No, I think I know exactly who I'm getting," Howe admitted. "I think I'm getting a sociopathic maniac. And not only do I feel like that's who I'm getting, I think that if Donald Trump was president we have four years of him defining conservatism."

The most recent polls have Trump and potential Democratic candidate Hillary Clinton at a statistical tie in Georgia, a southern state that has voted Republican every election since former President Bill Clinton won the state in 1992. Howe is likely seeing these numbers and is concerned with the loss of power for the GOP if the conservatives and the moderates split. The last thing he wants is the brand of conservatism denigrated by the likes of Trump.

"It's been bad enough with some of the people we've had define conservatism over the last several years," Howe continued talking about conservatives that have fallen on the wrong side of the culture war. "To have Donald Trump be our standard bearer I think would be so destructive, I don't know if we can recover. This is going to be a third party situation if we can't get him to lose the election."

Last week, Ted Cruz went on a tirade about Fox News and the network suddenly becoming the "Donald Trump network." It was almost as if Cruz was spinning progressive talking points blaming the Australian billionaire for the outcome of an election.

"I think it's a matter of, he creates ratings," Howe said, claiming that cable news' love-fest with Trump has all been about the ad dollars garnered, while America watches the Apprentice unfold in real life. "I want to address this idea that we were all missing in action when Obamacare came around, when the stimulus came around," he said refuting that the right didn't attack the President enough. "I was out there marching with the Tea Party in 2009... the fact that I'm now coming out against Donald Trump is actually very consistent. I'm against liberalism in the destruction of conservatism and that's what Trump represents."

Watch it all in the video below: