Seth Meyers: Phony spokesman story shows Trump is a liar and a clown — and possibly out of his mind 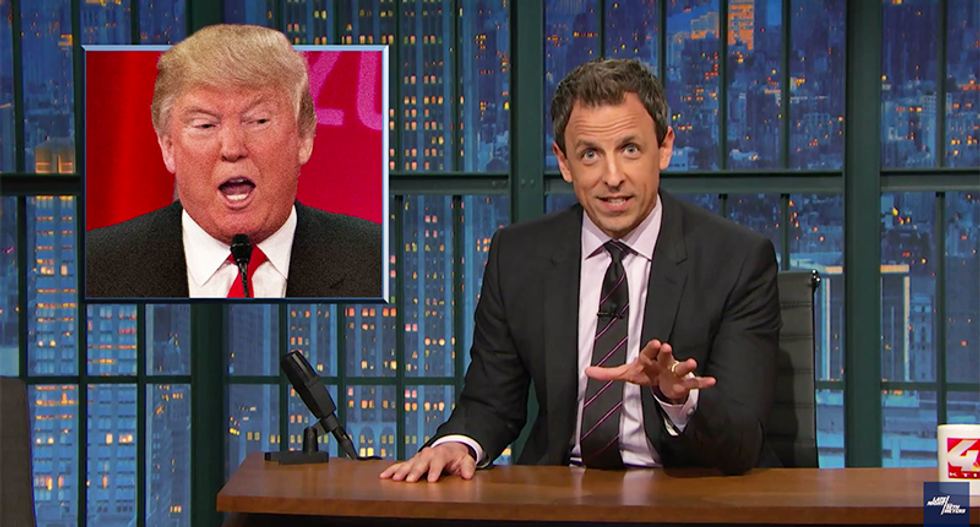 "Late Night" host Seth Meyers has done it again. His hilarious and fearless commentary about Donald Trump serving has his own public relations spokesperson reached a whole new level of mockery Monday night, when Meyers dropped the truth bomb that "Donald Trump, a man frighteningly close to the presidency, is a crazy person."

The Washington Post released audio tapes that appear to show Donald Trump (he didn’t even bother to disguise his voice) posing as his own spokesperson to bragging about how much publicity he was getting. Despite Trump's actual spokesperson saying it sounds nothing like Trump, it sounds exactly like Trump. In fact, when reporters confronted Trump about being his own spokesperson, Trump's response was to hang up the phone.

"It was so clearly Trump," Meyers said. "The only way 'John Miller' could have been more obviously fake is if he was three 10-year-olds, standing on top of each other, in a trench coat. In which case, the fake John Miller would have had the same size hands as the real Donald Trump."

In the recordings, Trump's fake spokesperson goes on to talk about his dating life, the end of his first marriage to Ivana Trump and his new relationship with Marla Maples. He tells the reporter that Trump "gets called by everybody in the book, in terms of women" asking him for dates. "Specifically, the book of 'Totally Real and Not Made-Up Women Who Call Donald Trump and Want To Go Out With Him and Who Are Definitely Not Fake,'" Meyers mocks.

The audio files of Trump talking about his relationship with former supermodel Carla Bruni, who later became the First Lady of France, sounded like a classic rock station. Trump said that Bruni was with Eric Clapton before moving on to Mick Jagger and then eventually Trump. Bruni responded to that saying, "Trump is obviously a lunatic."

When CNN asked Trump about the recordings live on the air, he tried to claim that he has so many people attempting to imitate him and that the audio sounded like "one of the many scams." Trump should know a scam when he sees one, Meyers said, “because he started Trump University." When that didn't work Trump pretended the "call got disconnected." When The Post tried to call back, Trump's secretary answered saying they got disconnected and Trump was now too busy. "That was Trump's secretary, Donna T. Rump," Meyers said showing a photo of Trump in drag.

Trump's been caught in yet another lie, even admitting in a 1990 court case that he used the fake name, John Miller. The reporter who did the initial interview with Trump posing as Miller says that she knew exactly who it was. She revealed that several weeks later Trump even called her to apologize for pretending to be Miller. People Magazine even published the apology after the fact. "I thought that if Donald Trump said the words, 'I'm very sorry,' he breaks the spell and returns to his original form," Meyers said of the candidate who claims he's always right.

The Republican Party has no idea what to do about the incident. When asked on CBS's "Face the Nation" about Trump serving as his own spokesperson, chair Reince Priebus was at a loss for words, laughed uncomfortably and said it was "odd." Meyers explained that Priebus's uncomfortable laughter was "how you laugh when someone's holding a gun to your head off screen. You couldn't see, but while he was laughing he was scrawling out the words, 'Please, help me,' on a piece of paper."

This might all seem like another in a long line of silly Trump history, but Meyers says this matters for two major reasons. "One, it often seems as though Trump can lie freely without consequence on the campaign trail. The fact-checking site Politifact has ruled a stunning 76 percent of Trump's statements as 'false, mostly false or pants on fire.'" Yet, somehow he eludes accountability. "That's why the John Miller story matters," Meyers explains further. "It's a clear-cut case where you can hear the audio for yourself and know that Trump is lying. Second, John Miller is a fake persona manufactured by Trump to aggrandize himself in the eyes of the public, which is exactly what he's doing now as a presidential candidate."

Since Trump has become the presumptive nominee he has gone back on literally every promise he's made to voters about self-funding his campaign, going after Goldman Sachs, not taking money from Super PACs and more. "He's doing the same thing to voters he did to reporters in the 80s and 90s," Meyers says. "So, get ready America, because it's only a matter of time before Trump announces at a campaign event that he's going out with Beyonce. Or John Miller will."