Seth Meyers reality check: 'The GOP Party is the party of Donald Trump — and has been for years' 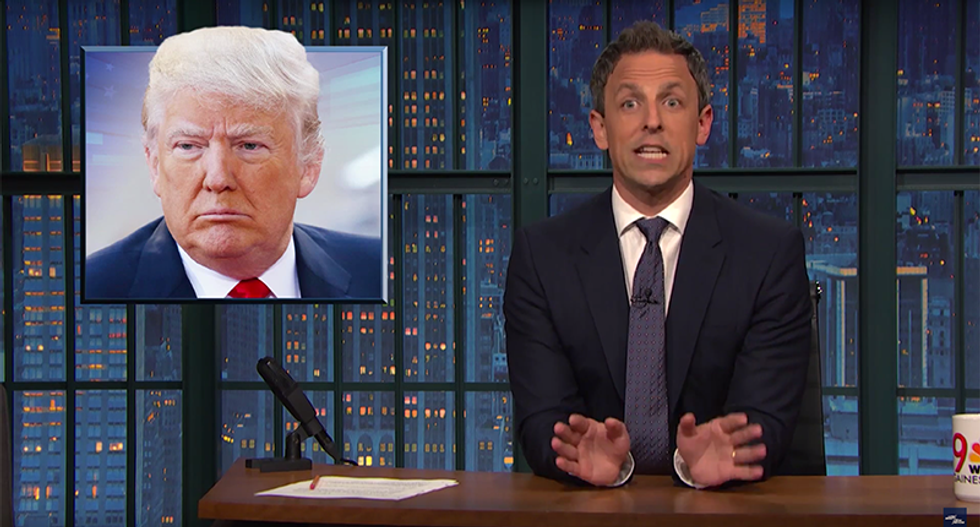 This is how Donald Trump came to be (Screen capture)

Sorry, GOP, you planted the seeds of hate, racism, xenophobia and greed that you’re now harvesting with Donald Trump’s candidacy.

Seth Meyers was quick to mock exiting candidate Sen. Ted Cruz (R-TX), Wednesday night, for not only being a national embarrassment but appearing to be universally hated by nearly anyone he has encountered.

But the real reality check came when Meyers showed the pathway the GOP took to get where they are now. "This should be a serious moment of introspection for Republicans," he began with the tough love. "How did they get to the point where they're handing their nomination to a race-baiting, xenophobic, serial liar who peddles conspiracy theories and thinks the National Enquirer is a real newspaper. The answer: This is no accident. This is not a fluke. The Republican Party is the party of Donald Trump — and has been for years."

Meyers showed a clip from 2009, when scenes of the "birther movement" were playing out across the country. "I don't want this flag to change! I want my country back!" the woman shouted holding up her own birth certificate.

"First of all, even if the president was a secret Muslim, he was never going to change the flag," Meyers explained. "That's like a surefire way to blow his secret." Meyers said that when Trump saw the hate and vitriol coming out of people seeing a black man become president, he merely fanned the flames.

"And how did GOP leaders react when confronted with the fact that large numbers of their voters believed these racist myths peddled by Trump and others?" he said before showing a clip of John Boehner saying that it isn't his job to stand up to his own voters and "it wasn't my job to tell them what to think."

"It wasn't your job to tell them? Your job title was literally Speaker!" Meyers exclaimed. "F*cking speak!"

These GOP leaders all openly accepted the "myths about the first black president being born in Kenya and being a Muslim," Meyers explained that these myths made Trump famous with conservatives. Now, suddenly, GOP leaders who not only endorsed other people but attacked Trump are coming to his side to help stop the GOP from turning into a sh*tshow. "This perfectly encapsulates why the forces opposed to Trump within the GOP were doomed from the beginning, because they were never willing to fully commit to standing up to Trump."

"At the end of the day, Republicans should do some soul searching about how they turn their party into the party of Donald Trump. The #StopTrump movement, for all its good intentions, was awkward, it was poorly organized. It was almost as awkward as this moment," Meyers said, showing Cruz elbowing his wife in the face.