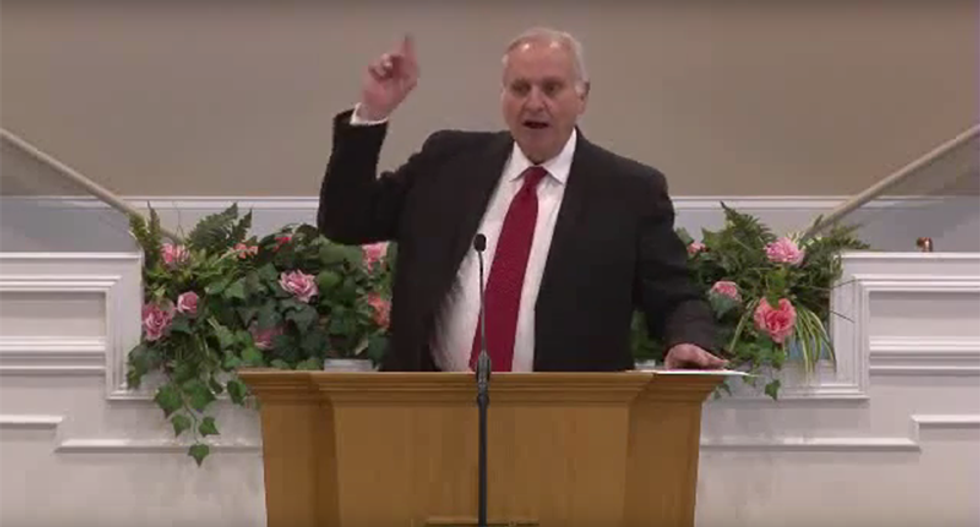 Fundamentalist Christianity is under a heavy threat from an ever changing world that relies on science for answers, technology, medicine, research and exploration. But Tennessee Pastor Charles Lawson hates science almost as much as he hates Katy Perry, Lady GaGa and their devil music. Perhaps that is why he is conveniently using conspiracy theories and unconfirmed assumptions to fit into his own ideology.

After a lengthy discussion about "spirit guides" that can take us from the Earth to the Heavenly world on the lost continent of Atlantis, bigfoot and UFO sightings on Mt. Shasta in California, Lawson declares the "scientific" facts. "Think about what I'm saying about aliens communicating with you. Aliens from above," Lawson says as he points toward the sky. "Something coming down from the skies and communicating with us here on this earth. A lot of scientists, a lot of them, and there's really no way to know specifically because of political correctness and the pressure that's put upon them. A lot of scientists have abandoned Darwin, but because of fear of losing their jobs, fear of losing the ability to produce papers, uh, fear, peer pressure, they have to keep it in, and they don't come out with it, but here and there some do. They have abandoned Darwin. They have abandoned evolution."

Of course, there is "no way to know specifically" since he's making up his claims. Specifics are no match for a fire-and-brimstone pastor who can simply point toward the sky and say "God did it."

Lawson continued that all of this comes down to scientists, who must now find answers to big questions, that evolution once provided these scientists, who have "abandoned Darwin." Instead, these scientists "have jettisoned Darwin and now they're looking up, and past, and they're getting into the spirit world, into the paranormal world. And the two of them, they compliment each other, and they begin to get into something that their scientific books know nothing about."

He is right about one thing, "You can get a Ph.D. from Harvard and not know one thing about a spirit." Ghosts or spirits are not part of the prerequisite requirements for engineering sciences at Harvard.

"What I'm trying to do in these lessons," Lawson enlightens his Sunday school class, "is to open your mind up and make you begin to think with a broader spectrum at the deception that is coming down upon us. Because it's coming from every direction."

The Search for Extraterrestrial Intelligence (SETI) relies on science to get its work done. Their radio telescopes "listen" to the spectrum of the universe and their vast computers and volunteers to parse actual data gathered from real science. While it might seem a fool's errand to some, writer Michael Crichton explained, “A wonderful area for speculative academic work is the unknowable. These days religious subjects are in disfavor, but there are still plenty of good topics. The nature of consciousness, the workings of the brain, the origin of aggression, the origin of language, the origin of life on earth, SETI and life on other worlds...this is all great stuff. Wonderful stuff. You can argue it interminably. But it can't be contradicted, because nobody knows the answer to any of these topics.”

Lawson wants his listeners to broaden their mind by shutting out actual science. Makes perfect sense. Watch the full video here but a selection below: