The mischievous origins of your favorite lullabies 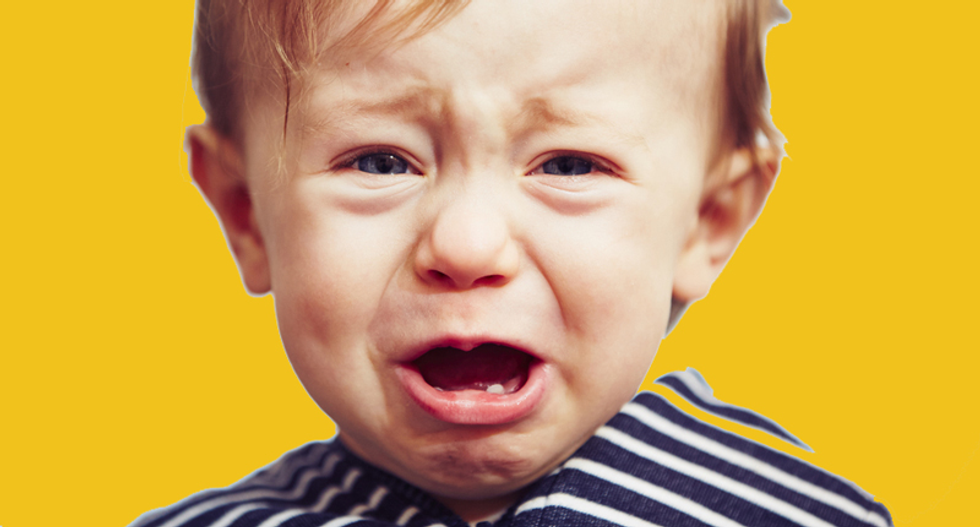 Crying baby (Shuttershock)
For humans, music is primal, elemental. It is one of our first interactions with the outside world, and also among our longest lasting memories: Studies show that even infants are imprinted with song, able to detect and recall complex rhythms and melodies. And the lullaby is the ancient musical form on which parents have relied since time immemorial to bond with their newborns, soothe their wailing and seduce them to sleep. The classic rhymes, however, also served as way for exhausted, soul-sore parents to vent at their bitchy offspring without fear of reprisal or public judgment.
Even in the womb, sound plays a vital part in human development, as a baby can hear its mother's voice through the wall of the womb at just 24 weeks old. And tests show that newborns respond to and enjoy rhythmic sounds shortly after birth. In fact, a 2013 study found that singing slowed a baby's heart rate, as well as improved its nursing skills and sleep. This helps explain not only why lullabies are found throughout the world and history, but also why they share structural elements. For instance, lullaby songs tend to have few words, contain simple repititions and usually occur in 6/8 or triple time, which creates a sort of swinging, comforting rhythm.
The classic rhymes also served as way for exhausted, soul-sore parents to vent a little at their bitchy offspring without fear of reprisal or public judgement.
Less obvious, however, is the tendency of lullabies to feature patently horrifying lyrics that evoke images of death, monsters, rabid animals and mortal injury. This desire to threaten and scare the bejesus out of the most precious and vulnerable among us is remarkably consistent across time and the globe.
Among the first-known lullabies is one found etched into a four-thousand-year-old Babylonian tablet, now housed in the British Museum. The lyrics, like those of all good lullabies that have followed since, are an absolute horrorshow, filled with finger-pointing, an angry god, parental betrayal and the threat of imminent violence.

Anyone who has offended a house god knows the chill of such a threat, akin to that felt when dad says he's going to get his belt to lay down a sweet whupping.
Those dusty lyrics might be quaint artifacts were it not for their utterly common tone. In Spain, the lullaby "Duérmete Nino," sung to the tune of "Rock-a-bye Baby" — you know, the tune about a newborn being blown from the top of a tree — includes the threat that if you don't go to sleep, then Coco the monster will come and take you away and eat you up. Sweet dreams!
This desire to threaten and scare the bejesus out of the most precious and vulnerable among us is remarkably consistent across time and the globe.
Iceland's nominee is "Bíum Bíum Bambaló," a bittersweet ditty in which the singer rocks the baby to sleep while warning of the dark blizzard coming. And don't mind that face peeking in from outside in the window. So rest easy and go to sleep now. Nothing to see here. (Naturally Sigur Ros does a lovely version.)
In Russia, imagine the furrowed brow of a babushka-clad peasant whispering the dirge-like "Bayou Bayushkji Bayou." The ditty concerns a mother sternly warning her baby not to lie too close to the edge of the crib or bed or else a grey wolf will sneak in, bite her child on the belly and drag it kicking and screaming into the woods, to be devoured under the willow tree. So better take care.
In Kenya, this traditional lullaby sung by the Luo people uses the same language of rocking as we do in the west, but while also alerting babies in the vicinity that they are so good for being quiet. And if if they dare cry out, then they'll surely get eaten up by a hyena or a leopard. (The Luo also have another guilt-drenched tune directed at parents who ditch their kids and leave the babysitter hanging.)
The lullaby includes the threat that if you don't go to sleep Coco the monster will come and take you away and then eat you up. Sweet dreams!
Every culture and language has their traditional version of this, the ultimate mind-game, and anthropologists say they arise in part from utterly justifiable parental anxiety. While the institution of parenthood has vastly changed since any of these lullabies were written — we now live in an age of vibrating comfy cribs, video camera monitors and sleep sacks — the underlying sentiments that inspire lullabies are still alive and unwell today. If there's any doubt, then check out the bestselling kids picture book, "Go the Fuck to Sleep," an instant classic of arch post-modernism crystallized perfectly by this Werner Herzog reading.
This story, by Jon Chase, originally appeared at Van Winkle's.
Science Video
Report typos and corrections to: corrections@rawstory.com.