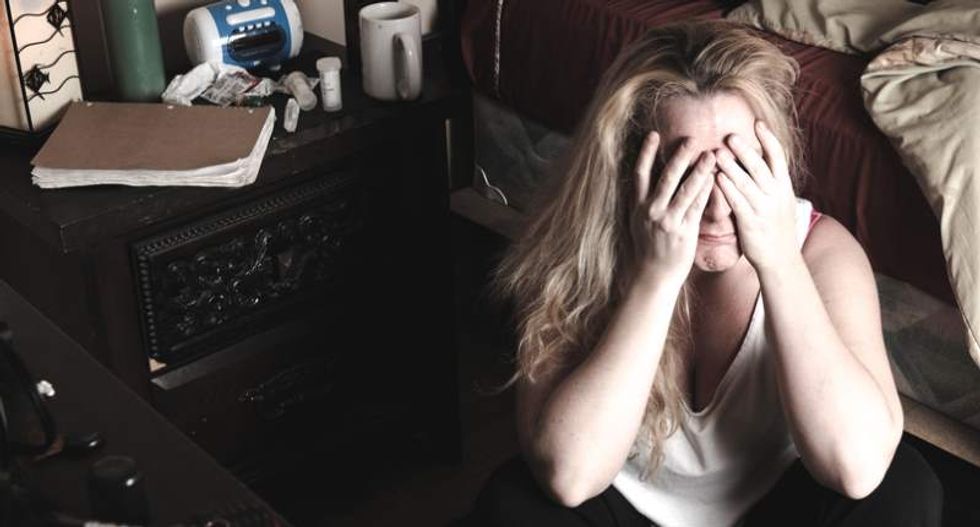 'A woman feeling depressed inside her bedroom' [Shutterstock]

Emma’s issues with sleep began three years ago. It was around the time she started to suspect her husband was having an affair. After her suspicions were confirmed, her husband left her. It was at this point that Emma*, a 30 year old human resources manager in San Francisco, began to experience depression and insomnia. She says she hasn’t had a decent night’s sleep since June of last year.

“It depends on the person,” says Dr. Jil Armbrust, a psychiatrist in the Bay Area, who has been treating people with sleep disorders for over 20 years. It may be common for those with different sleep cycles to develop depression, but it’s rare that you find an already depressed person who has a normal sleep cycle. Sleep and our mental states go hand in hand.

For Emma, the depression came first and insomnia followed.

“I can’t turn my brain off… I allow myself to explore these [upsetting] thoughts,” she says.

To combat the insomnia that comes with being agitated, Emma distracts herself: “I have a nightly crusade into Google. I think about what other people are up to. Should I go see my friend in LA? How much are flights?” She sleeps with the television on or podcasts playing, because she prefers to be “lost in someone else’s thoughts.”

One of the biggest issues Emma describes is at the workplace. Emma recalls how, when going through a particularly trying time with her insomnia, she would call in sick to work with a cold, because it was more believable and relatable than not being able to come into work because she wasn’t sleeping. When someone is finding it hard to stay awake at their desk, they’re told to drink more coffee. When someone has a cold at work, they’re told to go home and rest.

“People want to solve you in the workplace so that you can benefit the company,” Emma explains.

Different from insomnia, people with hypersomnia often sleep for more than 10 hours and will still feel compelled to nap during the day, even at times and in places that would not be considered socially acceptable.

Daniel*, a 31-year-old copywriter, has been living with depression for the past decade. He suffers from insomnia and hypersomnia and is most embarrassed by the latter.

Daniel experienced severe family trauma at a young age and used sleep as an escape. Before his insomnia kicked in a few years ago, he was staying in bed and sleeping for more than 11 hours a day. To this day, when he finds himself in a stressful situation, there’s a high likelihood he’ll need to take a nap. This often happens at inopportune moments.

Daniel recalled a time where he was moving into an apartment with his now ex-girlfriend. Her parents had travelled to help them move in, and as soon as they arrived, Daniel took a 2-hour nap. He was overcome with stress. While taking a 2-hour nap in the middle of the day sounds great, it wasn’t for Daniel.

“The lethargy hit me like a wave of warm bath water. It was uncontrollable. Her parents never forgot it,” he says. “They made jokes about it, but I knew they were mad.”

Daniel’s partner couldn’t understand why he’d nap all the time and would take it personally. As upsetting as the break-up was, Daniel could understand why it happened.

“It’s hard to sympathize with someone who is [always] tired,” he says.

Daniel says that reactions to his hypersomnia often take the form of “get your shit together.” When you’re an adult who sleeps through most of their days, you’re typically labelled as lazy and unmotivated.

“Who doesn’t want to be an early riser? Early risers are seen as productive ‘shit together’ types," he says. "People who have control over their lives and I want that so bad."

Emma also experienced bouts of hypersomnia. At one point, she was dealing with insomnia during the week and hypersomnia on the weekend. Emma knew her hypersomnia was another way of avoiding everything.

“When I’m sleeping, I don’t have to answer emails, phone calls, or be accountable to anybody. Everyone just has to leave me alone," she says.

Armbrust states that there’s a need to be as mature as possible when identifying a sleep disorder. People need to recognise the issue and take the appropriate steps, whether that’s going to see a doctor, taking medication or, in some cases, going on disability from work. As straightforward as that seems, the stigma surrounding insomnia and hypersomnia (and invisible illnesses as a whole) makes it extremely difficult for people to simply reach out for help.

Emma and Daniel have figured out a few ways to deal with it themselves. Both extoll the virtues of regular exercise, claiming it helps them manage their sleep. Neither take medication for their insomnia and psychiatrists like Armbrust aren’t quick with prescriptions either, “the important thing is to get regular exercise, practice some basic meditation, and maintain good sleep hygiene." Sleep hygiene includes simple things we hear all the time like avoiding caffeine and screens before bedtime.

There really is no easy solution. However, encouraging people to see sleep disorders as a legitimate medical symptom is a good start. It would help employers better understand the consequences of chronic sleep issues. It would help those who don’t suffer from sleep issues to be more sympathetic to their friends and co-workers. Most importantly, it would help those who suffer from sleep disorders to be more comfortable with addressing their illness. It’s a huge undertaking, but for real progress to be made, we’ll have to take mental issues as seriously as physical ones.

“It’s sad because it’s part of how people see me," says Emma, "not [as something] I’m going through."

*Names have been changed