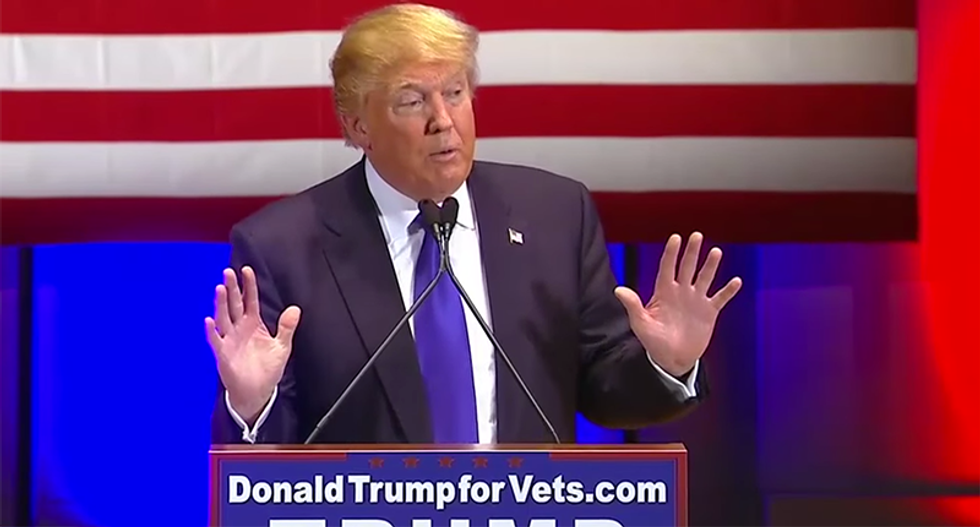 Veterans are not happy about Donald Trump's lie that he would donate $1 million to veterans back in January when he protested the Fox News presidential debate. It turns out, the $1 million that Trump pledged and said he gave, he never gave.

When he was caught in the lie by the Washington Post, his campaign swore that he already gave the money. The problem is that none of the groups who received money in January ever got a donation from Trump. When people started asking questions about where the money went, Trump campaign manager Corey Lewandowski said the campaign wouldn't reveal where that money went.

Trump, on the other hand, did admit that the money he promised had not been donated and that his campaign, who said it was already doled out, was lying.

"Later Monday evening, Trump called the home of James K. Kallstrom, a former FBI official who is chairman of the Marine Corps-Law Enforcement Foundation. The charity aids families of fallen Marines and federal law enforcement officers," the Post reported. "Trump told Kallstrom that he would give the entire $1 million to the group, according to Kallstrom’s wife. Sue Kallstrom said she was not sure whether the money had been transferred yet."

The Post also called Trump out for his promise to raise $6 million for veterans in general, which prompted him to say, "I don't have the notes. I don't have the tape of it."

But when angry veterans, who saw through the Trump photo-op, showed up to protest outside Trump headquarters, Trump accused them of being ungrateful and blamed his opponent, Hillary Clinton.

“All talk, no action. I don’t want to be called a politician,” Trump said while announcing the $1 million donation in January.

The veterans protesting him on Wednesday would argue that Trump himself was "he was “all talk, no action."

Check out a video of the veterans below courtesy of the Daily Mail: