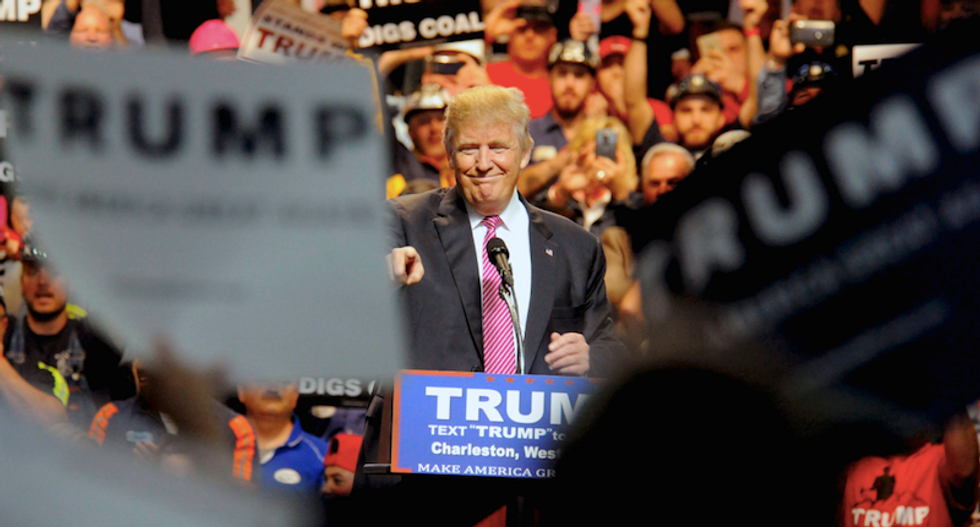 Donald Trump is testing out themes to use against Democrat Hillary Clinton as the presumptive Republican presidential nominee tries to persuade disgruntled party loyalists to get behind his campaign.

At a rally in West Virginia on Thursday night, the billionaire businessman criticized Clinton for the vast sums of money that she and her husband, former President Bill Clinton, accepted for the Clinton Foundation, which he called a "scam." The Clintons have dismissed criticisms of the charitable organization as politically motivated.

Trump also linked her with some of her husband's decisions when he was president in the 1990s, like the NAFTA trade deal that opened up trade among the United States, Mexico and Canada. Trump has vowed to rewrite trade deals if elected on Nov. 8.

"We have to win the general election. We cannot take Hillary Clinton anymore. NAFTA was given to us by Clinton," Trump said. "We can’t take any more of the Clintons."

He put on a hard hat presented to him by the state's coal miners' association and blasted Clinton for saying recently she would impose clean-energy policies that would put coal miners out of business.

Still, Trump faces an uphill climb to bring the party together.

House of Representatives Speaker Paul Ryan, the top elected Republican in the United States, said on Thursday he was not ready to support Trump, a sign of lingering establishment concern about the New Yorker's position on immigration and trade.

But in a sign some Republicans are rallying around Trump, Nebraska Governor Pete Ricketts, whose family has helped bankroll an anti-Trump group, is set to endorse him on Friday.

Former Texas Governor Rick Perry, who last year described Trump as a "cancer on conservatism" while running against him for the Republican nomination, told CNN he now supported him as well.

Trump's effort to raise as much as $1 billion for his campaign and the Republican Party for the general election is just getting started and may not be able to rely on some major past sources of financial support.

One example of that is Theresa Kostrzewa, who raised money for 2012 nominee Mitt Romney and 2016 candidate Jeb Bush. She gave no indication she would raise money for Trump.

"I'll be voting in November," she said. "Those are my plans."

Trump emerged as the last man standing in the Republican presidential race with a vow to disrupt the old order in Republican Party politics, but is finding that in some respects, he needs the old order.

The Republican National Committee, which is trying to bring the various warring factions together, said it anticipated a meeting soon between Trump and Ryan.

One opportunity could come next week, when Trump may visit Washington, where his top backer on Capitol Hill, U.S. Senator Jeff Sessions of Alabama, has been trying to get more lawmakers to endorse him.

But the message emanating from the Trump campaign is the same.

While Trump did not mention Ryan in his Charleston speech, an introductory speaker, the Rev. Mark Burns, made reference to it.

"You know the reason why the establishment is afraid of Donald J. Trump?" he said. "They're afraid because they can't control him."