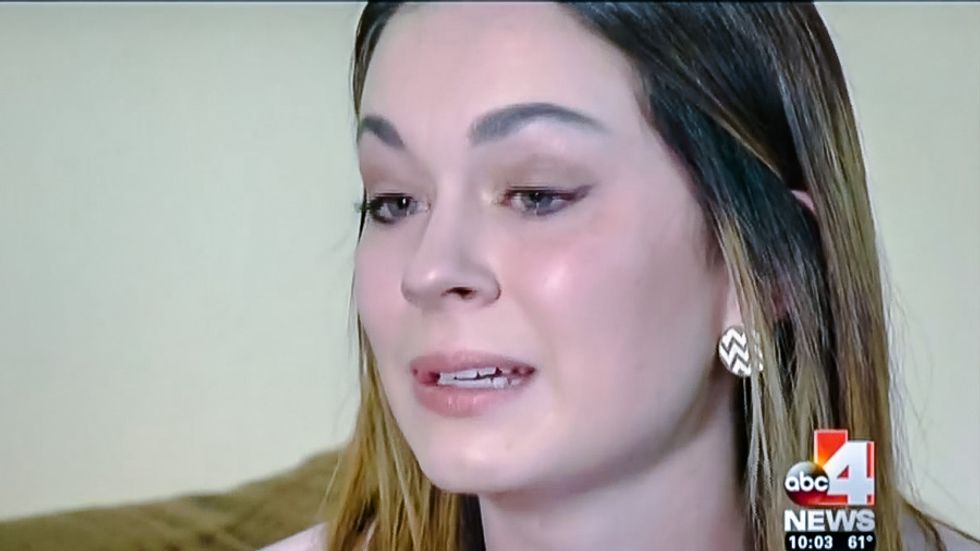 In an interview with KTVX this week, rape survivor Amelia Dennie broke into tears as she explained how the court system allowed her attacker to go free even though he was caught acknowledging the crime on tape.

After years of reporting on rapes and sexual assaults in Utah, KTVX reporter Kim Fischer took a look this week at how the state was handling the issue.

In fact, rape is the only violent crime in Utah that occurs at a higher rate than the national average, according to the Utah Department of Health.

And while nearly 90 percent of rapes in Utah are never reported, victims who do report them often do not receive justice.

Dennie told KTVX that she was raped in 2014 while on a first date. With the help of investigators, she was able to record her attacker admitting that he was remorseful for the rape.

"Like I said 'stop' multiple times, did I not?" Dennie can be heard saying on a recorded conversation that was presented to the jury.

"Well, you did," the attacker admitted. "I know you did. You have every reason to be at a loss for words or hate me or worry about anything because that should have never happened. A no is a no, that's 100 percent on me."

Dennie broke into tears as she recalled her experience in the courtroom.

"The jury should have cringed hearing his attorneys say my shorts were too short and they didn't they agreed. It doesn't matter what I was wearing or what I did, I said no and that's all that matters," she insisted. "I wish a jury that represented my society could have known that and could have believed that enough to take my no's for what they're worth and they didn't. Just like he didn't."

Prosecutor Ryan McBride, who handled Dennie's case, was at a loss for words when KTVK asked him how the alleged attacker was allowed to go free.

"I don't know why. I've thought about that a lot. I don't know," McBride lamented. "She reported it to police that night. She had a medical exam that corroborated her story and then we had a recorded interview with the suspect. When I see that evidence I say we've got everything here."

But Alana Kindness, Executive Director of Utah Coalition Against Sexual Assault, said that she was not surprised by the outcome.

"It’s unfortunately not that uncommon," she explained. "It's actually uncommon for cases to even get that far."

McBride noted that only a small fraction of women who are sexually assaulted in Utah ever see their day in court.

"When we first hear of someone that's sexually assaulted our first reaction is why didn't you do this? We have these stereotypes. What were you wearing? And we start to criticize the victim. I think the initial response we should have is, are you ok," McBride pointed out.

Earlier this month, 20-year-old Madi Barney accused Brigham Young University of punishing her for reporting a rape. After Barney notified police, the Mormon-run university launched an honor code investigation against her.

Barney recently filed a sexual discrimination suit in federal court because BYU blocked her from registering for classes.

"I am a survivor of rape, and now BYU has put my academic future on hold due to their allegations that I broke the Honor Code in the circumstances of my assault," Barney's petition said. "I want victims of sexual violence at BYU to have an immunity clause from the Honor Code so that they don't feel afraid to report."

As for Dennie, she said that she struggles daily even though it has been nearly two years since the rape occurred.