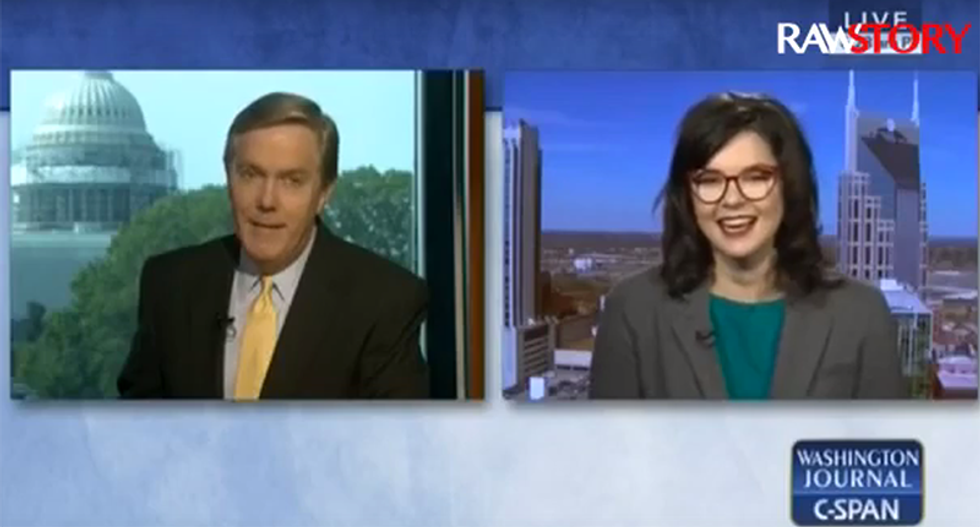 If you want to see a real slice of America, listen to the call-in line on C-SPAN. If you have isolated yourself in the gentrified, hipsterhood, juice bar, away from the comments sections on Fox News stories, then here is a slice of what you're missing.

Today, during an interview with the director of the Center for American Progress's Women's Economic Policy, Sarah Jane Glynn, a caller from Deer Park, Washington went off on a nutty tangent about a worldwide lesbian/globalist conspiracy. It's Mother's Day, and all Glynn wanted to talk about was the state of motherhood in modern American society, and that mothers are getting a raw deal, economically speaking. Instead, what she got was a caller that brought a new level of crazy.

"Are you a progressive or a globalist," Joshua started out asking. Glynn asked him to clarify how he defined a so-called globalist. "Well, we have a war coming in this country soon between globalist and nationalists. I find your groups to be globalists. You want to destroy us and come up with this paradigm. People, like yourself, who claim to be a woman, probably is a lesbian, with a different set of guidelines towards life, want to talk about this country, why don't you take your act on the road and go to Saudi Arabia or Iran and clean that up first—" and that was when C-SPAN cut the caller off.

Host Steve Scully had to wag his finger to tell the callers they better behave or he was turning the car around. But, rather than double over with laughter, which is why I am not welcome on C-SPAN, she literally Beyonce'd the hell out of Joshua from Deer Park, Washington. "I personally don't think being called a lesbian is an insult," she began. "I would also say, certainly there are issues globally. You know, gender discrimination is not something that is limited to one country. We find it virtually everywhere across the globe. But, I do think, because things are difficult for women somewhere else, doesn't mean that we should turn a blind eye to what is happening here in the United States."

Glenn responded to the horrific moment on Twitter following the interview by saying that despite the combative callers, people seemed to still be divided about what she looked like on television. It's nice to know some things are always constant.

My favorite part about Twitter after I'm on tv is how divided people are about whether I look good or terrible.
— Sarah Jane Glynn (@Sarah Jane Glynn)1462717887.0